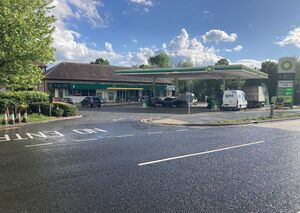 8 more photos in the gallery
Location:

A pair of petrol stations on Breakspear Way, between Hemel Hempstead and the M1, have been recognised by the highway authority and given official road signs.

Parking within the bp filling station is limited to 30 minutes maximum stay from entry to exit and is strictly enforced by bp themselves.

The petrol stations were previously known as Hemel North Services or City Station - the latter name is odd considering Hemel isn't a city and this isn't a station. A Holiday Inn is also positioned next to the westbound petrol station, but it isn't strictly part of the service area.

When Breakspear Way became a dual carriageway in the 1960s, a pair of petrol stations were built at the Buncefield Lane junction. A Forte Post House Hotel was built next to the westbound side, which is now the Holiday Inn.

The land next to the westbound petrol station was later bought by BP and used to build BP House, one of their main offices. It is no longer used by them and has been redeveloped as Breakspear Park.

Unrelated to these petrol stations, in the early 1960s there was a plan for a hotel next to the motorway maintenance compound, which was rejected. The site was then investigated as a potential motorway service area for the M1, as an alternative to building Toddington. That plan was dropped because the government didn't want to be accused of double standards over the hotel rejection.

Following upgrades to pedestrian walkways on both sides of the carriageway here and the installation of a new pedestrian crossing between the two sites in 2021, the local authority changed the signage for the westbound site from the standard TRSA green sign to a local black and white sign.