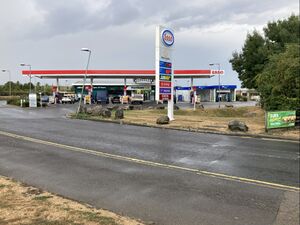 A15 Eye Roundabout
(also accessible to traffic on the A1139)

This is the service area on the A15 at Eye Roundabout. For the services on the A47, see Eye Green.

A supermarket-branded petrol station in the development area to the east of Peterborough.

Parking on the forecourt is limited to 20 minutes maximum stay and is strictly enforced. 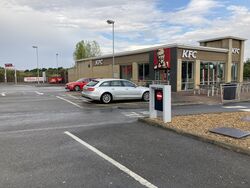 The Eye Roundabout has been a magnet for development since it was built. A number of proposals for the north-west corner of the roundabout have included a "retail warehouse park" including a fast food restaurant and a filling station in 1988, a supermarket in 1991, and a retail park in 1993.

By the late 1990s, proposals began to emerge for a service area here with Margram being granted planning permission in 2000 to build a filling station here, leaving a gap for the a restaurant and hotel to be built on the land behind it. A succeeding plan followed in 2001 which led to the site eventually opening in 2002 as a BP filling station with a Supermart store.

Upon opening, the Supermart store included a Costa café and offered Cuisine de France bakery products. A KFC Drive Thru was later added behind the filling station in 2003. An attempt to added the missing hotel eventually came in 2007 by MPRU Developments Ltd. however their plans were refused.

The Co-operative Group sold the site to Rontec in 2016, who rebranded the site to Esso and added a Subway store. Rontec also briefly introduced a SPAR store to the site which later changed to a Morrisons Daily store in 2017.