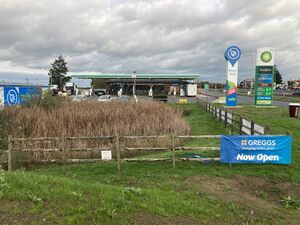 A299 Thanet Way at Waterham

A collection of facilities attracted to the Highstreet junction on Thanet Way. 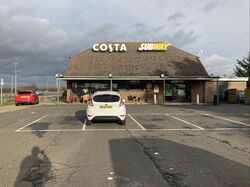 As the main road to the coast, Thanet Way was an obvious place to build facilities. The westbound petrol station (known as Lychgate) was built in the 1930s, while the eastbound side was built in the 1970s - at the time the road was still single carriageway.

In the 1980s the dual Shell petrol stations gained restaurants: westbound a Little Chef, eastbound a Happy Eater - which would itself also become a Little Chef in 1996. The eastbound Shell forecourt was taken over by George Hammond plc and converted to BP around 2004.

The westbound Little Chef closed in 2008 and became boarded up for a while, eventually reopening after a couple years with a Costa and Subway under the operation of Goldex Investments.

The eastbound Little Chef closed in September 2012 and re-opened as Buffalo Café Diner, but this closed in 2016. Euro Garages shortly purchased the building and opened their 67th Starbucks store here in January 2017.

The eastbound forecourt underwent a full rebuild in August 2013 with an expanded Spar store and Costa Express, which would be later rebranded in February 2019 to Welcome in partnership with Southern Co-op. Café Gusto and Lavazza were later added.

As part of MFG's acquisition of George Hammond Plc on 30 June 2021, the forecourt saw an immediate rebrand of store to Budgens and the return of Costa Express. A further interior refurbishment followed in October with Greggs filling the former café.