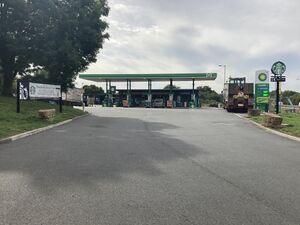 A small petrol station and coffee shop on the Coventry Eastern Bypass. 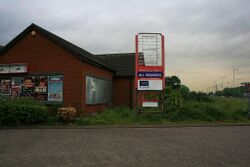 The former abandoned Little Chef building before it was demolished.

The petrol station opened in the early 1990s. It was soon joined by the Coventry branch of Little Chef, which was abandoned after a fire in August 2007. From 2012, MFG used a section of the former totem pole to advertise their Subway.

The Little Chef restaurant stood empty until early 2019 when MFG demolished the building and built a new Starbucks Drive Thru in its place, with the store opening at 8am on 20 February 2020.

The filling station was previously branded Texaco, before rebranding to Murco in 2010. During this time, the shop was branded Costcutter Express and the a Subway drive thru which wrapped itself around the shop building.

The site was acquired by MFG in late 2014 as part of their purchase of Murco and its assets, and they converted the site to BP in early 2015. MFG then later removed the Subway in 2018 before redeveloping the filling station in autumn 2019, demolishing the existing sales building and replacing it with a new Londis store with a Greggs concession.