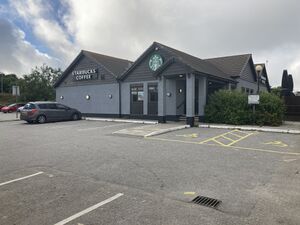 Parking within the Starbucks car park is limited to 3 hours maximum stay and is strictly enforced by Parking Eye. 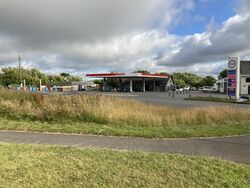 Chiverton Cross Esso stands next to the abandoned Three Burrows.

Chiverton Cross was a crossroads positioned where the smaller of the two modern roundabouts is. There was a large garage on the corner, which is now the used car dealership.

Other facilities arrived after the roundabout was built in the 1980s, which replaced three cottages. The Chiverton Cross branch of Little ChefHistory opened in 1988. This was joined by a Burger King in 1998. Those closed in 2008, becoming a Starbucks store.

Three Burrows became a Total site in 2003, following the merger of Elf with TotalFina. The shop went on to be branded Premier. Three Burrows was then re-branded Esso in 2011, creating the unusual situation where two seemingly identical petrol stations trade side-by-side. In the same year, Chiverton Cross was removed from Ordnance Survey maps where it had been listed as a full service area.

Expansion plans and the future

Several plans to significantly expand facilities around this area have been proposed over the years.

There were plans to add a picnic area and drive-thru restaurant to the Three Burrows site in 1998, but this never happened.

Another plan was granted permission in 2013 which would have seen the car sales showroom demolished and a 67-bed hotel with restaurant built in its place, but this wasn't carried forward. A subsequent plan would have seen the car sales showroom turned in to a restaurant with the rear of the building maintained as workshop garages. Eventually a Rowe's Cornish Bakers store was added in 2019.

A separate plan for a hotel and restaurant to be built on the north-western arm of the original roundabout was granted planning permission in 2016, which was renewed later.

Meanwhile, Cornwall Council granted planning permission for both filling stations to be demolished and replaced with one single, larger petrol station in 2018. Further proposals for a hotel and restaurant development adjacent to the current filling stations was granted in August 2019.

As part of the project to upgrade the A30, by 2024 the Chiverton Cross Roundabout will be closed. Access to the service area will be provided via the new Chiverton Junction, approximately half a mile down the B3277. It's not yet known whether the road signs will promote the new entrance, or whether the diversion will impact trade.