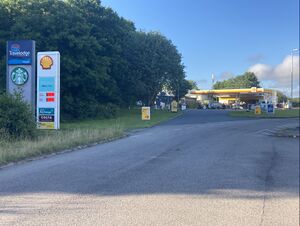 A30 at Logans Moor Roundabout

Hayle is Britain's most southern and most western service area, and it was the home to one of the most well-preserved former Little Chef sites in the country. 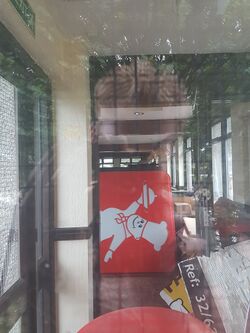 Some Little Chef signs stored in the former abandoned building.

The petrol station was built in the 1960s, on the old alignment of the A30. It was joined by Hayle Little ChefHistory in 1989.

The Premier Inn, adjoining pub and McDonald's all opened around 2000. The Premier Inn later received a first and second floor extension in 2015, with the ground floor being retained as parking.

Facing increased competition (especially as the McDonald's is more visible), the Little Chef closed in 2004. Travelodge then built a hotel in the former restaurant's car park, and plans were made for the Little Chef to reopen to coincide with the hotel opening. However, the owners of Little Chef got into financial difficulties and the restaurant remained closed.

The building was filled with original signs, equipment and promotional materials, which remained there for a long time, even after every other Little Chef had closed. It was eventually demolished by EG Group in January 2019. EG Group eventually replaced it with a new Starbucks Drive Thru, which opened on 20 December 2019.

Four Shell Recharge electric vehicle charging points were installed here. They are due to be activated in February 2023.