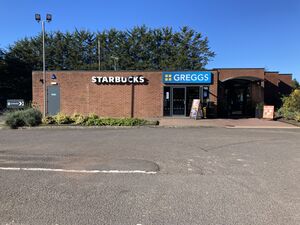 A once busy former Little Chef site as the A75 arrives at Dumfries, this is the first and only signed service area between the M6/A74(M) at Gretna and Dumfries. 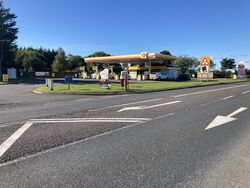 The service area was built in the early 1980s and opened with a Shell filling station alongside the 'Collin' branch of Little ChefHistory. Following the opening on the Dumfries bypass in the early 1990s, Forte added a Travelodge to the site in the mid-1990s. A Burger King was later added to the site by owners at the time, Granada, in 1998. This later closed in the mid-2000s.

The Little Chef closed in September 2012 along with 67 other underperforming sites. The site then became home to an independent restaurant called Curly Coo's, who changed very little of the interior. This lasted until 2015.

Euro Garages bought the restaurant building in 2017 and converted it into one of their Starbucks stores. They later added a Greggs store, which opened on 11 June 2021. The Greggs store is in the space previously used by Burger King.