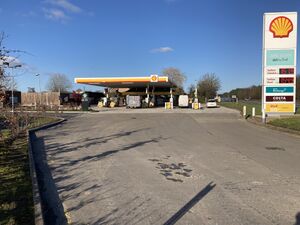 A168 between Thirsk and Dishforth

Two petrol stations on the link from the A1 to the A19. 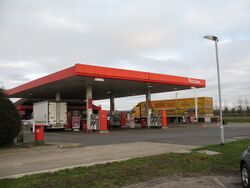 The northbound service area is built on a former brick and tile works. A garage was built here operated by Thirsk Motorway Services Ltd, named Midway services. In 1974 there was a plan to add a motel here.

BP significantly expanded the site in 1976 under the name Halfway Garage, named after the Halfway House which is positioned behind it. The forecourt later became Total, and in 2011 changed to Shell who now refer to the site as Gristhwaite.

There was a small café here, which in 1981 Little Chef wanted to replace with one of their restaurants, but the new diner actually opened as their sister brand, Happy Eater. In 1993 this became a Little Chef, which closed in February 2012. In late 2012 it became Mama B's restaurant, which closed in September 2013 due to low customer usage.

Euro Garages later demolished the former restaurant building in April 2019 and built a Starbucks Drive Thru on the site, opening on 12 December 2019. The original plans also included plans for two 'pod' units described as a 'food to-go' pod and a 'bakery' pod (possibly Greggs) but the plans were later amended to remove these.

The southbound petrol station was built in around 1988, with Diner 168 opening three years later. It promoted itself as being the last restaurant "for over 50 miles". The forecourt was formerly operated by Malthurst and branded Jet. The forecourt was later acquired by MRH who rebranded the site to BP in 2012.

Work also began on two units on unused land adjacent to the existing car park in summer 2019. After planning issues, this was completed in autumn 2020. New plans to part-demolish the unit to make the unit into a restaurant add a drive-thru lane to the rear of the unit were approved in July 2021.

MFG commenced redevelopment works on the forecourt in January 2022, with the new filling station set to rebrand to Esso along with featuring a new canopy, larger Londis store, new high-speed pumps (including an AdBlue pump) and the installation of two new electric vehicle charging points. This was expected to be completed in 2022, but works have been halted as the site is one of 87 petrol stations that MFG intends to sell in 2022 under a deal with the Competition and Markets Authority.