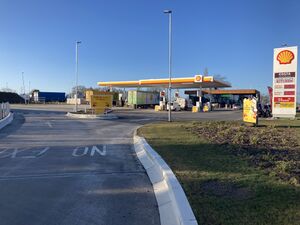 A19 between Middlesbrough and Thirsk

This site is better known as Exelby services, after the owners whose name was displayed prominently around the site.

The service area here started with a pub called the 'Waggon & Horses Inn', next to the single carriageway A19. The road became a dual carriageway in around 1970 with no convenient turn-around point.

The pub was acquired by Yorkshireman Rob Exelby at this point, the owner of Exelby Services, who added a caravan park in the mid-1970s and Esso fuel facilities in around 1977.

Following the dualling of the A19, Exelby also commenced plans for a southbound site.

By the early 2000s, both sites were branded BP before rebranding to Shell in 2014. 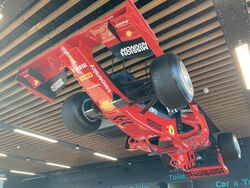 The Formula 1 car, suspended from the roof inside the Londis store.

By the mid-1980s, Exelby had built a fuel forecourt on land to the south of the pub so sold the pub building to Forte who heavily modified the building in 1987 to become the Ingleby Arncliffe branch of Little Chef. The Little Chef received some new competition in 1997 when Exelby built a small café to the west of the Little Chef.

In around 2005, the caravan park closed causing the parking area to shrink. The Little Chef restaurant also closed around the same time and was later demolished in 2012, leaving behind a square patch of grass in the middle of the parking areas with little evidence of what used to be there, other than a few Little Chef-style lampposts.

The northbound site was redeveloped during 2020, with a significantly larger forecourt opening on 30 November 2020. It also had a Londis store and a secure HGV parking area. The Londis store has a Formula 1 car suspended upside down on the roof along with a number of new grab and go options including a Stone Willy's Kitchen concession. 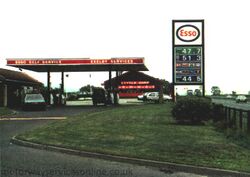 The southbound services in 1991.

A southbound service area didn't actually appear until 1985, along with a bungalow called Trenholme Lodge. The forecourt was built in the middle of the old alignment of the A19 and was branded Esso. The filling station was later joined by the Trenholme branch of Little Chef in 1987.

The Trenholme Little Chef closed in around 2005. It went on to become CJK's Restaurant which closed in the early 2010s, then Polly's Diner and then Jan's Café and Takeaway, which was advertised as a truckstop.

Jan's closed on 10 August 2021, with the owner Jan having worked at the site for 27 years. The inside of the restaurant maintained some of its original Little Chef fittings and furnishings throughout its time as the various independent restaurants including the kitchen layout, tables and chairs. The building was later demolished in Autumn 2022 ahead of a redevelopment scheme for the southbound site similar to the 2020 northbound redevelopment.

Reecy's Burger Van was added to the southbound HGV parking area in May 2021 to compensate for the loss of the cafe.