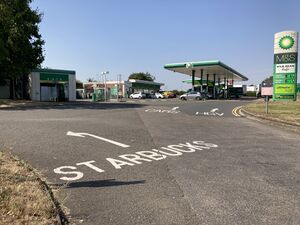 A story of two services: officially it's the site next to the roundabout which forms the main service area. 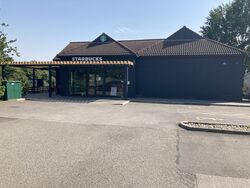 The former northbound Little Chef is now a Starbucks.

Planning permission for two Margram service areas here were granted in 1986 with both sites opening in 1988 with a Mobil filling station and a Little Chef restaurant on either side with the northbound side also including a 32-bed Travelodge hotel. Both the service areas were positioned at the start of the brand-new Towcester Bypass and were slightly offset, with the larger northbound one exiting onto the roundabout and the southbound one being built across the historic alignment of the A43 whilst being set back from the road to allow space for the A43 to be dualled.

Margram later planned to build a car showroom and workshop in the gap between the filling station and roundabout in 1991. This land was later used in 1996 when a McDonald's Drive Thru was built.

It was clear throughout the 1990s that Margram favoured the northbound side more due to the additional access and as a result the Little ChefHistory restaurant received an extension in 1993 followed by the filling station sales building receiving an extension and a new jet wash in 1995.

Since opening, the Travelodge has received several extensions: In 1990 it gained a further 8 bedrooms and in 2001 gained a 22-bed two-storey annexe was built to the rear of the existing hotel.

The northbound Little Chef closed in August 2017 and reopened that October as a Euro Garages operated Starbucks.