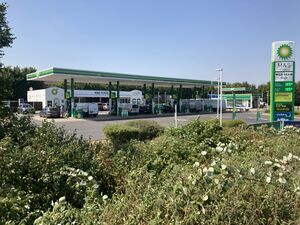 A petrol station at the northern end of the Brackley bypass that was once planned to be so much more.

Plans for a service area here were developed in the mid-1980s to coincide with the opening of the A43 Brackley Bypass. Outline planning permission for a trunk road service area with a filling station and restaurant was granted in 1986.

When the bypass opened in 1987, BP drew up several plans for the site with one plan including a restaurant, hotel and business facilities alongside a filling station. This plan was eventually scrapped with BP only building the filling station, opening in around 1991.

Granada later gained planning permission to build a restaurant and hotel here in 1999 (likely to have been a Little Chef and Travelodge) to compliment the filling station but this didn't happen.

BP redeveloped the site in 2001, with the site becoming a BP Connect site and gaining a Wild Bean Café. The site later gained a M&S Simply Food store in 2007.