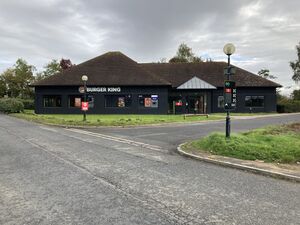 Three facilities are now situated around the A16/A17 Sutterton Roundabout: A former Little Chef site, a new drive-thru restaurant and forecourt and a truck stop.

There are two service areas at the Sutterton Roundabout.

Short stay customer parking is available for cars at all facilities at both sites.

Secure HGV parking is only available at Sutterton Truck Port and is free for the first 2 hours, after which HGVs must pay £25 per 24 hours. 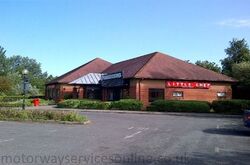 This service area started out life as a garage in the north-east corner of the junction in the 1960s, replacing an existing building.

Meanwhile, about a mile to the east, the Algarkirk branch of Little ChefHistory opened in around 1970, also known as Thorley Farm services. It was a simple, small building with a car park. When the newly realigned A16 opened, Little Chef saw an opportunity to move out of the unsuitably small building and to build a new one here at Sutterton. The Sutterton branch of Little ChefHistory opened in 1991 alongside a new filling station. The old site became Steve Thorley Potato Equipment.

The filling station was formerly branded as Texaco until the early 2010s when the site was bought by BP who added a Wild Bean Café. The site was later acquired by MRH who added their Hursts branded store. This meant that the site became a rare example of a Wild Bean Café that was not paired with M&S Simply Food or BP Connect.

MRH were later acquired by MFG in 2018 which saw the end of the Wild Bean Café, being replaced in 2019 by a hot food counter and Costa Express machine. MFG later rebranded the store to Londis in 2020, as well as adding multiple grab and go options. Another internal refurbishment was made in October 2021, with the shop space rearranged to add a new Greggs store, opening on 28 October 2021.

The former restaurant building was refurbished and reopened on 10 October 2018, with a ceremony attended by representatives from Boston Borough Council. The Burger King was now joined by new Greggs and Subway stores.

The new units traded until March 2020, when they were forced to temporarily close due to the ongoing COVID-19 pandemic. The Burger King reopened in summer 2020, before closing again, at which point it was announced that the Greggs and Subway stores would not be reopening. The Burger King eventually reopened in July 2021 but it continues to face stiff competition from across the road. 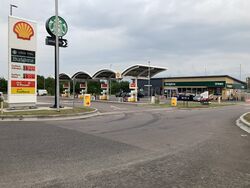 During summer 2018, construction began on a second service area, positioned on the south-west corner of the same roundabout. The new site, known as Sutterton Truck Port, partly opened on 25 June 2019 and offers two forecourts: a Shell filling station operated by AKV Services Ltd for small vehicles, and an Inver filling station exclusively for HGV.

While the new building was still under construction, all of the direction signs on the roundabout were updated to confirm that there were now two official "Services", at two different exits from the junction. In line with UK regulations, no information is provided to motorists on what the difference between the two "Services" is.

The car forecourt included a Budgens branded store, as well as a Starbucks Drive Thru café, operated by Kbeverage, which is attached to the back of the filling station building. Meanwhile a McDonald's Drive Thru restaurant opened at the back of the site in September 2019.

The secure overnight HGV parking and HGV forecourt were expected to open in September 2019, but this was delayed and they eventually opened in early 2020. The truck port is signed from the roundabout and on both the A16 and A17 and was erected before the site even opened.