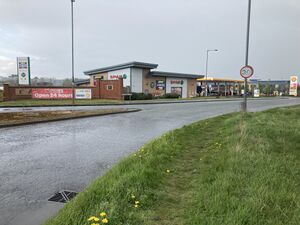 A16 at Fairfield Roundabout, Louth

A new petrol station serving the A16 and the Fairfield Industrial Estate, north of Louth.

No HGV parking is available within the services, however a free lorry park is provided within the industrial estate.

The expanding industrial area to the north of Louth included provision for a new facility on the A16. The first formal proposal came in 2002, when a restaurant, hotel, pub and petrol station were all given planning permission here. This wasn't acted upon, and in 2006 a new proposal for a pub, petrol station and drive thru was approved.

Glade Garland were then given permission to build a petrol station here in 2010 with space left for a hotel and pub-restaurant too. The hotel and restaurant weren't built, but a petrol station operated by Blakemore Retail opened on 1 November 2014. It was the first of Blakemore Retail's sites to include a SPAR store with Greggs and Subway franchises situated within the store.

Planning permission was granted for a drive-thru coffee shop in 2017 to fill the empty space left over. These plans were later amended in 2019 to also include a drive-thru restaurant. The drive-thru coffee shop was built by EG Group in 2020 with the store opening as a Starbucks Drive Thru on 16 October 2020. The drive-thru restaurant was also announced in 2020 as a McDonald's Drive Thru and building commenced on the restaurant in December 2020. However, building later paused in January 2021 and plans were changed to a KFC Drive Thru. The KFC eventually opened on 29 September 2021 and was officially opened by the Mayor of Louth, Darren Hobson.