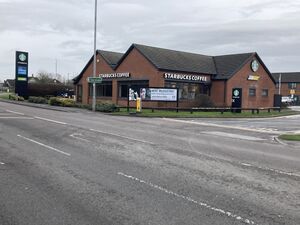 A former Little Chef and filling station combination on the outskirts of Middlewich.

Use of the forecourt is strictly enforced by Euro Car Parks and parking or stopping on the hatched markings is strictly prohibited.

The site was developed by Trusthouse Forte in the early 1990s and opened in 1993 as the 'Middlewich' branch of Little Chef alongside a Travelodge hotel and Shell filling station. The Little Chef restaurant was extended in 1998 and gained a Burger King franchise however this later closed in 2009. Following the closure of the Burger King, the Little Chef was one of the victims of the January 2012 closures.

Travelodge planned to extend the hotel in 2006 but later withdrew the plans.

The filling station underwent major redevelopment works in 2011 which saw the existing car wash removed to make way for a larger sales building.

The restaurant building was later acquired by Euro Garages who turned the restaurant into a Starbucks store and the Burger King unit into a Subway store.

A small business park is accessed through the services.