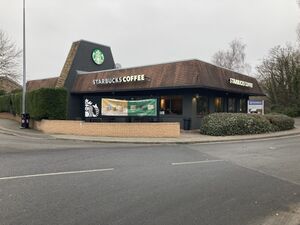 A large Starbucks on the Worksop Bypass.

Throughout the 1980s Little Chef were planning a restaurant at the next roundabout, one mile to the north of here. This project never happened, but instead Kelly's Kitchen opened a service area here in partnership with Petrofina in around 1989.

Shortly after opening, Kelly's Kitchen was taken over by Forte and this became the Worksop branch of Little ChefHistory. The Little Chef later gained a Burger King, but this had closed by 2009.

The Little Chef restaurant was identified as one of a number of underperforming branches and closed on 11 January 2012. The building was later purchased by Euro Garages who transformed the restaurant into a Starbucks store and re-utilised the former Burger King space by turning it into a Subway store.

The forecourt went on to become Total. This was sold to Shell in December 2012, following Total's nationwide shutdown.