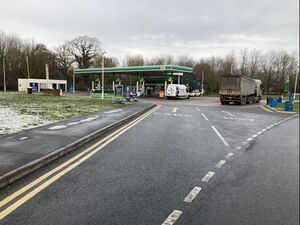 A143 and A146 at Gillingham Roundabout

A large, expanding service area at the northern end of the Beccles bypass which is seeing some recent interest from some big names.

Parking within the McDonald's car park is limited to 2 hours maximum stay and is strictly enforced by National Parking Enforcement Ltd.

Although the town of Beccles is in the county of Suffolk, the service area is placed at the top of the bypass and is in fact in Norfolk.

Plans for a service area here were developed by Mobil in the early 1990s. The site opened in 1996 as a Mobil filling station and a McDonald's Drive Thru restaurant. The forecourt was quickly rebranded to BP in 1997 following the merger of Mobil and BP. The site was originally known as Gillingham service station. Some documents also refer to the site as Hearts service station but it isn't clear where this comes from.

The forecourt was acquired by Malthurst in the 2000s and a Wild Bean Café was added. Malthurst later became MRH in the early 2010s who added their own-brand Hursts store to the site, retaining the Wild Bean Café. Following the merger of MRH with MFG in late 2018, the Wild Bean Café unit was eventually removed and replaced with Costa Express machines. MFG now refer to the site as Beccles service station.

The McDonald's has also seen several refurbishments over time including a new outdoor seating area and signage refurbishments in 2012 along with a drive-thru reconfiguration in 2013.

The forecourt received a major refurbishment from MFG in March 2021, gaining a new, larger Londis store in the process along with new canopy, pumps, signage and a new jet wash. The new Londis store opened with a launch day on 15 April 2021 and now offers a number of new grab and go options. 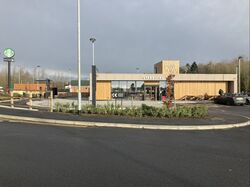 One of the new additions to the site, a Starbucks Drive Thru.

Frenbury Developments were granted planning permission in September 2020 to add an additional 2 drive-thru units and a new farm shop at the back of the site. As part of the works, a new link road through the site would be created, leading to a new roundabout which the new facilities would be accessed from. The existing McDonald's car park and drive-thru lanes would also be reconfigured and extended to the east of the restaurant, with a new children's play area also being added.

Works commenced in late 2020, with the McDonald's reconfiguration being completed in Spring 2021. An EG Group-operated Starbucks Drive Thru later opened on 25 March 2022, with them also opening a KFC Drive Thru on 11 May 2022. Both projects were delayed due to issues caused by COVID-19.

Construction on the farm shop is yet to commence and it is unknown when these works will begin.

In summer 2021, excitement and confusion was caused when American restaurant giant Wendy's placed stickers on the approach signage on both the A143 and A146 suggesting they are opening a restaurant here too. Whilst no official plans have been submitted by the company, Wendy's made a return to the UK in June 2021 and they do intend to expand across the UK.