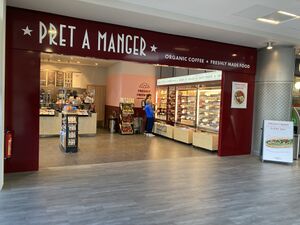 Pret A Manger are a sandwich chain who have many stores located within shopping centres and transport hubs around the UK.

Moto were the third operator Pret have been working with, in a partnership which began in October 2020. This saw stores open at Cherwell Valley and Rugby over the winter, with the brand expected to be rolled out nationwide during 2022.

Moto promoted Pret as being a response to requests for more healthy eating options on the motorway, while Pret said they had wanted to explore new locations as the Coronavirus pandemic was going to affect their business model. Pret then announced a partnership with MFG's forecourts, which potentially means that Pret could become a common sight on roads across the country.

Pret said that their new Moto sites were taking 25% more in sales than their usual locations, beating all expectations.

Welcome Break also intend to expand their Pret partnership, with their second store opening at the brand new Newark site in October 2022. If successful, they intend to roll-out Pret to some of their busier sites in 2023.

The 'Pret-isation' of the road network has been a long time coming.

Back in 2001, Roadchef specifically said they had Pret in mind as they created On Route, which was hoping to provide a faster hot food service.

Pret itself first appeared on the motorway at Welcome Break's site at South Mimms in August 2016.

Roadchef teamed up with Pret A Manger in December 2017, opening a store at Chester. This was followed by a store at Clacket Lane westbound in March 2018.

Both Roadchef's stores closed in early 2020, leaving only the one Welcome Break store, before Pret began working with Moto.

Pret A Manger can be found at some service areas:

Pret A Manger has been removed from the following service areas: