7 photos in the gallery

Sawtry services is a plan to bring what was left of the former Toll Bar services on the old A1 back into use, creating a new service area at A1(M) J15. 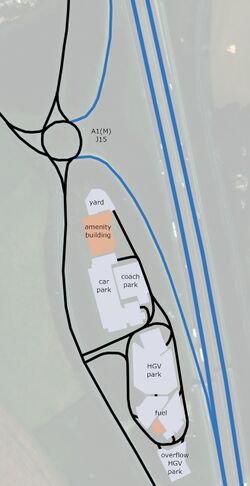 The new amenity building takes a hangar-style design. On the ground floor (walking from the entrance to the toilets) would be Greggs, WHSmith, M&S Simply Food, Costa, Burger King and KFC. There would be seating by the entrance, and a Costa lounge upstairs. There would also be a petrol station which had been expected to hold a drive thru Costa, but that has now been removed.

Unlike other services they have been proposed recently, this one will be much smaller and although it will be positioned off a junction, it will only be available to northbound traffic. There will be no signage on the A1(M) southbound, other than signage to discourage HGVs.

The junction is much quieter than the other junctions Moto have been targeting lately, so less work would be required, although Moto will be paying for new traffic lights and double yellow lines on Toll Bar Way. The plans consume all of the land available, while the parking areas will meet the bare minimum of what's required.

The chosen site is a strategic move which introduces the Moto brand to a new section of road. It is positioned prior to the busy Peterborough services, while to the south there is the expanding service area at Brampton Hut. Also in its favour are the facts that a truckstop at Alconbury recently closed, a rival operators' service area at Black Cat is expected to close in 2022, and the opening of the upgraded A14 may further increase traffic levels. 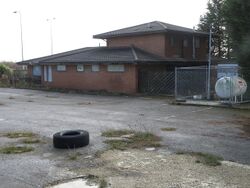 The former Little Chef, pictured in 2007.

The northbound side started out as an orchard and terraced housing on Ermine Street, the historic route of the Great North Road. On the southbound side was the Toll Bar Cottages.

The corresponding Sawtry South Happy Eater was a mile down the road at Redwings. Both those two sites were managed by Kamper Services, who built a hotel, called the Toll Bar Lodge, here at Sawtry North in 1989. This hotel became a partner of Pavilion Lodges in 1994.

Sawtry North was converted to become a Little Chef in 1996, following their acquisition of Happy Eater. A Little Chef had already been built on the opposite side of the road; that one was the Sawtry branch, and it opened in February 1984, after the Toll Bar Cottages were demolished in the early 1980s. These two now operated as a pair. The forecourt was branded Q8.

Everything changed in 1998, when the old Ermine Street was replaced by the new A1(M) motorway. The upgraded road narrowly passed the old northbound services, taking away some of the petrol station. A new road, Toll Bar Way, was built to the west and provided access to what was left of the northbound side. Too much of the southbound side was taken by the new road and it had to be demolished. In theory it would have almost fit in the gap between the A1(M) and the new B1043, but that's before you account for the effect of the new embankments.

Back in 1993, Forte had registered a plan to upgrade the site. This would have been likely to be with a view to receiving road signs on the new A1(M). Their planning application was refused, and Peterborough services was built instead.

The hotel was compulsory purchased by the Highways Agency, although the building itself survived. The site therefore continued with just the Little Chef, positioned on the old road and accessed from the nearby A1(M) J15. Remarkably this situation lasted until 2007. Arguably it was now doing the work of three other branches, but given that it was hidden away from the motorway, but it's still no surprise that it was a casualty of Little Chef's financial difficulties.

With that Little Chef closed, the site was abandoned. The remote and discrete building later became Pulse & Cocktails Adult Superstore, despite much local outcry. While this kept one building in use, the abandoned hotel and forecourt area, plus the unused land that was now surrounded by roads, became a magnet for fly-tipping.

There had been a plan in 2010, would have rebuilt the petrol station and brought the motel back into use. A developer received planning permission, but couldn't find an operator to sell it to.

Rival operator Extra had tried to argue that there was no need for it, and that the land was too small and constrained. Meanwhile, current land-users Pulse & Cocktails were unhappy that they were being pushed out by Moto acquiring their lease, and had asked if Moto would be willing to incorporate them. Pulse & Cocktails later closed in March 2022, citing a site redevelopment project.

Planning permission was granted in February 2020.