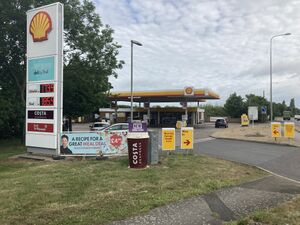 A1 and A421 at the Black Cat Roundabout

The site of one of the most famous Little Chefs in the country, famous mostly because it was next to the notorious Black Cat Roundabout.

There was a junction in this location for centuries. In the 1920s, the Black Cat Garage was built in the corner, which had a black cat as its emblem. This became a nightclub and then a restaurant, before lying derelict.

In the 1970s, the site was demolished and replaced by a pair of forecourts, known as the Black Cat Filling Station. The northbound forecourt was purchased by Petrofina and became Total, and then in 2012 changed to Shell, who refer to it as Fortune.

To the north (behind the services) is land which has previously been considered for use as a separate truckstop.

The Black Cat name and emblem have been adopted by a community radio station based in St Neots. During the 2004 road upgrade, a sculpture of a black cat similar to the garage's logo was placed outside and continues to be found there, despite several thefts and it having to be moved for roadworks. 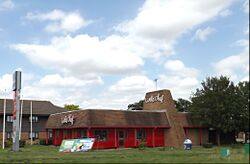 Petrofina's partners built a Kelly's Kitchen restaurant next to the forecourt. Like all their projects it had a large building, with an overhanging roof and a tall chimney. At this point it was only accessible to A1 northbound traffic.

Shortly after it opened, Kelly's Kitchen were purchased by Trusthouse Forte who re-branded the restaurant as Little ChefHistory. A Burger King franchise was added in 1997 (but later removed) and a Travelodge was built here in 1999. With the motel came an exit leading back to the A421, making it a junction service area.

The Little Chef went on to survive every sale and crisis that could be thrown at it. It was repainted and refurbished in 2011 as part of the short-lived Wonderfully British project.

When Euro Garages wanted to close every Little Chef, there were rumours that they would hold on to this one until last. This was partly down to it being an accessible and visible location, partly down to it being next to a very busy road, and mainly because it was a large building and they didn't know what to do with it. In the event, this and many other branches lasted longer than their legal rights to the brand name, so moved over to a temporary brand, EG Diner. Despite rumours that it could hang on as a restaurant, in June 2018 the diner closed ready to become a Greggs.

In one sense the restaurant was always on borrowed time, because this is a very poorly aligned section of the A1 and it will inevitably need to be replaced before too long, causing trade to significantly drop. However, all that ever happened was that the roundabout kept being enlarged.

That 'borrowed time' came to an end in February 2019, when a preferred route for the A421 (not A1) upgrade scheme was announced. The chosen option will see the entire service area, the former southbound services, and the land to the north all consumed by an enlarged roundabout. The two rejected options would have potentially allowed the service area to stay, but it may have been deemed unsafe.

The works are expected to start in 2023, at which point Black Cat services will, according to the current proposals, be compulsory purchased and demolished.

Shortly after the preferred route announcement, EG Group closed their Subway store in September 2020, leaving the site trading as just the Greggs store to trade in a very large and now very empty building. The Greggs soldiered on for another three months until it also closed in December 2020, leaving the building empty and ready for demolition. Following delays to the commencing date of the works caused by the COVID-19 pandemic, the Travelodge hotel continued to trade until 3 November 2022 when it too closed. This now leaves the Shell forecourt as the last remaining trading facility.