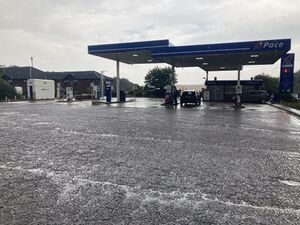 15 more photos in the gallery
Location:

B1043 Old Great North Road between Sawtry and Alconbury

Redwings is a historical anomaly: it is Britain's only official B-road service station.

Redwings was one of many small petrol stations on the historic alignment of the Great North Road. It served southbound traffic and was named after the Red Wings Bungalow at the back of the site. Although this part of the A1 was poorly aligned in modern terms, it was still built for high speeds, and the petrol station had a long run-in and a wide entrance.

The petrol station became an early candidate to gain a restaurant with planning for this starting in 1977. The restaurant opened in the early 1980s as the Sawtry South branch of Happy Eater. The site was managed by Kamper Services.

The restaurant was later converted to a Little Chef. The petrol station was branded Q8. The hotel, the Redwings Lodge, opened here in the 1980s. It was briefly partnered with motorway operator Pavilion in 1994. The Redwings brand has since been turned into a chain.

Forte proposed an upgrade to the entire Redwings site in 1993, which would prepare it for the opening of the new A1(M) motorway. Planning permission was refused in favour of Peterborough services. 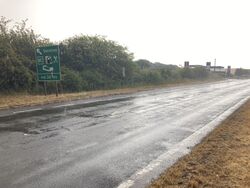 Redwings still retains its old A1 signage, despite now being on a B-road.

The new A1(M) opened in 1998, replacing the old A1. The old southbound carriageway of the A1 was repurposed as a local road, the B1043. Responsibility for the road and its service stations transferred from the Highways Agency to Cambridgeshire County Council. Road layouts and signs were updated to reflect the new status, and the two-way traffic arrangement.

Despite all this, Redwings service station managed to make it through the whole process without any changes. It was still there, albeit now serving a local B-road rather than one of the country's most important A-roads. The road signs referring to Redwings (coloured green like the A1) were unchanged, and continue to only face southbound traffic. The lengthy run-in for traffic joining and leaving the road remained.

When a service station has official road signs, this indicates that an agreement is in place to ensure a certain standard of facility is provided, and it is used by this website to regard a service station as official. At Redwings, it is very unlikely that any such agreement exists. Given that Cambridgeshire County Council haven't touched these road signs more than 20 years after inheriting them, it is more likely that they have no record that the signs are there, or that they don't want to stir trouble by taking down signs which have been there for so long.

While the physical layout of the site is still unchanged to this day, inevitably there have been many internal changes. The Little Chef closed in 1998, and is now a restaurant called Spiceworld. The petrol station is now branded Pace.

InstaVolt intended to add two electric vehicle charging bays to the forecourt in 2017 but these weren't installed.

Spiceland will rebrand to The Royal Spiceland on 1 December 2022 following a change of ownership.