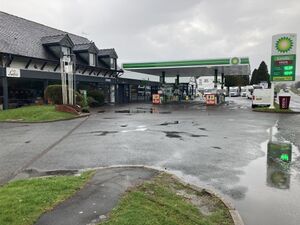 A former Little Chef restaurant and petrol station by the side of the A591 as it nears Windermere.

The filling station here dates back to at least the 1960s where it was joined by a Little ChefHistory in the 1970s, in a special chalet-style building.

The forecourt received a major redevelopment in 1989 when it became a BP site.

The Little Chef closed in 2004, becoming Lakewinds Diner in 2006, before reopening as a Little Chef in summer 2009 as part of their expansion plans. This only lasted until 2012 where cutbacks struck again.

The forecourt rebranded to Esso in 2011 under AUK Investments' ownership. In 2015, AUK extended the sales building and former restaurant introducing BikeTreks and Café Ambio to the site in 2016. Café Ambio later closed in 2021.

AUK rebranded the site back to BP in 2020 before selling the site, along with its other 5 filling stations in the area, to MFG in December 2020. Following the takeover, MFG rebranded the shop to Londis and added a number of grab and go options to the store.

There was another Little Chef a few miles east of here at Staveley, which lasted from around 1970 until 1985.