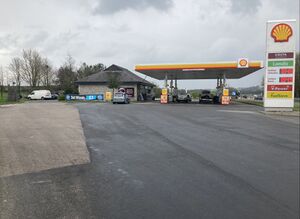 A pair of forecourts in the Lake District. 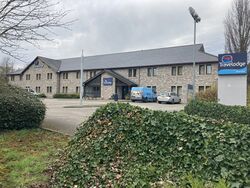 The buildings are all cladded in mock-local stone.

There was a building called Prizet View to the west of the A6 (now A591), built after the road was straightened out in the 1930s. This gained a petrol station in the 1960s.

Little Chef owners Granada added a restaurant next to the southbound petrol station in 1998, and later added a northbound Travelodge hotel in 2005. The Little Chef closed in the same year and became The Energy Centre, now a flooring company.

The filling stations later rebranded to Shell in 2015, where they also each gained a Mace store.

AUK Ltd. submitted plans to build a Costa Drive Thru with 8 electric vehicle charging bays on the northbound side in 2020 but were refused permission on the basis that the development was not needed in such a rural location. The plans were then re-submitted before being rejected again in January 2021.

MFG acquired the filling stations in December 2020 following the purchase of six sites (including these two) from AUK Investments Limited. As part of this, MFG rebranded the shops from Mace to Londis.

The southbound petrol station is one of 87 petrol stations that MFG intends to sell in 2022 under a deal with the Competition and Markets Authority.