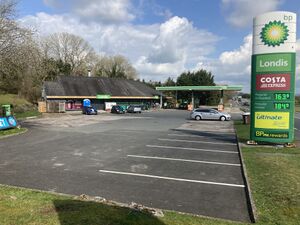 A590 eastbound between the M6 and Grange-over-Sands

Now just a single petrol station with a strangely-shaped shop, but Greystones once offered a little more than this.

The north-eastbound filling station was built in the 1950s, and was joined by a property called Greystones which is where the name of the service area derives from. The property is still there but hidden by the tall hedges. At the time the road was single carriageway so the garage could be accessed in both directions.

Meanwhile, a little further down the road was the Lindale branch of Little Chef, which had opened in 1970.

In the mid-1970s, the road here was upgraded to a dual carriageway and the nearby village of Lindale bypassed. This saw the filling station here receive a major upgrade with the sales building gaining a café and the site becoming a BP site.

The existing Little Chef in nearby Lindale was struggling to attract trade with it now being situated on the B5277 so several plans were drawn up to build a service area on the new road opposite the Greystones site featuring a new Little Chef. The Lindale branch eventually closed in 1985, being demolished shortly after and was replaced with two Little Chef restaurants here, one on each side. The south-westbound side would have been one of Little Chef's more scenic sites, with a large parking area leaving space for another filling station which never materialised.

Both restaurants closed in around 2005 with the north-eastbound restaurant being demolished and the south-westbound side becoming several restaurants before more recently becoming a kitchen design studio. The site is now empty.

The forecourt café closed in 2011 and later became part of an extended Mace store. The car park also used to feature a tourist information board but this was removed in 2018.

MFG acquired the site in December 2020 following the purchase of six sites (including this one) from AUK Investments Limited. As part of this, MFG rebranded the shop from Mace to Londis and introduced a number of grab and go options within the store.