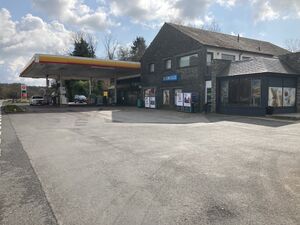 A590 at Newby Bridge

The filling station here dates back to at least the 1950s and was formerly home to Newby Bridge Motors.

Planning permission was granted in 1991 for a 16-bed hotel to be added to the site, but this wasn't built. There were also plans in 1999 to convert part of the café into a toy and teddy bear museum, but these plans were later withdrawn.

The site was formerly branded Texaco and included the Bridge Café until 2010. The filling station went onto gain a Mace store the early 2010s before rebranding to Shell in 2016. The café later became a coffee lounge before eventually being closed to the public.

The site was acquired by MFG in December 2020 following the purchase of six sites (including this one) from AUK Investments Limited. During early 2021, the site underwent refurbishment with the site reopening on Thursday 18 February 2021 with a new Budgens store and Greggs store in the former redundant café space.