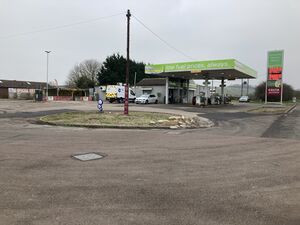 This is the service area on the A46 named Fosseway. There are other petrol stations with the same name, and other services on the A46.

Please note that the site is currently offering fuel and a limited selection of shop goods from a portable building. The site isn't expected to fully reopen until summer 2023.

With the opening of the new A46, this forecourt is now positioned by the new Stragglethorpe Junction. 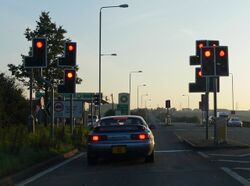 The old Stragglethorpe Crossroads, with the petrol station on the corner.

The site dates back to the 1950s, when it was a small garage by the Stragglethorpe Cross Roads. It was once branded Esso, and had a Wimpy restaurant, which became a café.

It then became a BP, with a Londis store attached, which still advertises itself as the 'Stragglethorpe Cross Roads' branch. It was never formally signed from the A46, as it relied on the fact it was positioned right next to the road at a point most traffic was stopping for the traffic lights anyway.

Everything changed in 2009, when work started to replace the A46 with a new dual carriageway. The Stragglethorpe Cross Roads became a particularly complicated section of the works, but in 2012 the new junction opened with the services now positioned off the side of the roundabout. Part of the old cross roads can still be seen, including the old entrance to Fosse Way.

In 2014 LMP announced a plan to re-build the petrol station, replacing it with a larger facility with a patio and a coffee shop. The building would have been shaped like a barn, and LMP said they would have requested signs be placed on the new A46. Planning permission was granted, and with that the site was sold to Applegreen.

Applegreen changed the branding to their economy brand, 'Low Fuel Prices Always'. Their signage calls it the 'Fosseway' branch, although sometimes they call it 'Fosse Way'.

Applegreen stated that the loss of trade since the new junction opened has made the forecourt "unsustainable". In 2017 they received planning permission to demolish the forecourt and replace it with something much larger including a Subway, Starbucks, more pumps and dedicated parking - the theory being that the food offer would encourage more custom. The large 'A46 Hand Car Wash' would also be removed however this cease trading during 2021 with the area of the forecourt being blocked off.

In 2018 Applegreen purchased Welcome Break, and they announced that this new site would be a good candidate to transfer to the new branding. Of all the transfers announced, this is the only one involving a service station in mainland Great Britain that is not currently signposted from the road. It is currently signed from the new roundabout, but not from the new A46.

The site officially became part of Welcome Break in summer 2021, with the shop receiving a minor refit. The economy Applegreen branding continues to be used publicly. Meanwhile, Welcome Break have proposed a brand new service area, nearby at Hickling. It's not clear if this means they won't be redeveloping Fosseway after all.

Despite the uncertainty of the future of the site, Welcome Break added a Greggs unit here in December 2022. That Christmas Day, the building was severely damaged in an arson attack. A temporary sales building was provided from 4 January 2023, allowing the facility to partially reopen. A full reopening will take at least several months.