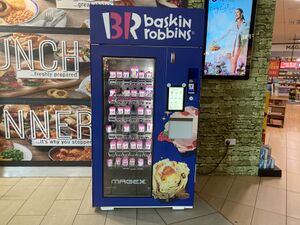 Baskin Robbins is an ice cream specialist company, originally based in America, who have been around since 1945.

On the motorways, they were first introduced to Welcome Break's services at Michaelwood southbound in June 2014, using stand-alone outdoor units. During the winter of 2016, all Baskin Robbins outlets were removed.

Baskin Robbins made a small return to the motorways in summer 2021 when Roadchef introduced a Baskin Robbins cabinet in their WHSmith store at Northampton northbound, but this was later removed in the winter.

Baskin Robbins used to be found at the following service areas: