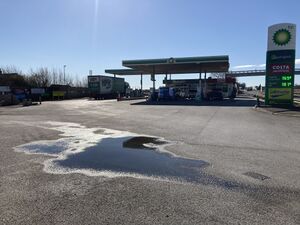 A1 southbound between Doncaster and Pontefract

A small service station on an old and busy section of the A1. 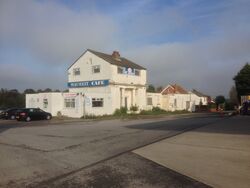 The former Waywest Cafe, with the old building entrance visible.

The garage also provides access to a small lane called West Park Drive. This lane used to provide access between the Great North Road (now the A1) and Stapleton Hall, a stately home built in the early 18th Century and demolished in the 1950s. There was a wide entrance and a gateway lodge, as many of these buildings had, called West Lodge. This would have been outside the entrance to what's now Busy Bee's Diner.

The lodge was demolished in the 1960s when the A1 was upgraded to dual carriageway here. A petrol station called the Wayside Garage was built, and a café called Wayside Café. That café was built behind another house, which looked not unlike others which had been built along West Park Drive, but by the old entrance are two grand pillars. The two buildings later merged, and throughout the 2000s the roof of the old café appears to have continually deteriorated and has now been removed entirely.

There had been several attempts to add a northbound filling station opposite in 1974, 1980 and again in 1988 however all three of these plans were refused.

The café building has also been at risk of demolition in 2002 and 2008 to be replaced with houses but it has survived to this day. The café continued trading and went onto become Waywest Café, and then Busy Bee's Diner before closing in early 2021.

The forecourt was expanded in 2011 swallowing a building to the side of the existing forecourt, used by A1 Recovery, which was demolished. The former eXpress store became Londis, which is now an Applegreen store. The petrol station is the main service station facility, with the café just being a neighbouring facility. 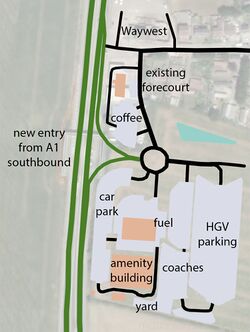 Applegreen purchased a significant stake of Welcome Break in November 2018, with this site becoming one of the trade-offs of the purchase. It was anticipated that the site would eventually be re-branded Welcome Break, and adjusted to reflect the rest of their estate.

While no changes had taken place on the ground (and Welcome Break stated that Applegreen still operate the site), in December 2021 Welcome Break announced plans to demolish the existing forecourt and replace it with a whole new service area.

A large, new forecourt shop would be provided, with a drive thru window, food brands, toilets and showers. A separate drive thru Starbucks would be provided, bringing it in line with the usual Welcome Break offer. There would be parking spaces for 138 cars, 10 electric vehicle charging bays, 58 HGVs, 5 coaches and an abnormal load bay.

Perhaps the biggest improvement would be to the slip roads, which would be significantly extended. The existing arrangement is described as "unsafe". West Park Drive residents would be able to exit through the service area, and space would be left for an additional road to be built to the east. The pedestrian footbridge would be removed; the bridge had previously provided access to a bus stop which was formally removed in 2014.

The expansion would take place mainly to the south and the east, leaving the former café building alone.

The investment comes despite a vague aspiration from National Highways to upgrade this part of the A1. It's possible that the new road would leave the new service area redundant, but it's perhaps more likely that it will incorporate it and deliver it more traffic.

Roadchef have objected to the proposal, on the grounds that it would be an inappropriate place for it.