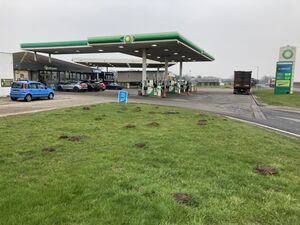 A1 northbound between Newark and Doncaster

Another in a series of small petrol stations on this old section of the A1.

At Cromwell, HGVs are advised to use the Cromwell village exit, to enter the site from the old road. The direct entrance from the A1 is suitable for cars only. 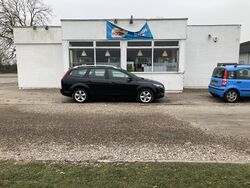 A Little ChefHistory and Esso forecourt opened here in the late 1960s as a brother to North Muskham. The Little Chef closed in 2008 and became Café Amore, which itself closed in 2015 and is now an empty building up for sale.

In 2007, the filling station was purchased by The Carsley Group who redeveloped the site with a new sales building, forecourt and canopy. They had planned to rebrand the site to a BP Connect store however the site opened with a Londis store and coffee lounge. In 2015, The Carsley Group also planned to redevelop the site again to introduce a new, larger sales building by demolishing the former Little Chef building and adding new parking areas. These plans were later withdrawn following the sale of the site to Applegreen in 2016.

In November 2018 Applegreen purchased a significant stake of Welcome Break. One of the trade-offs of the purchase was that Cromwell would eventually be re-branded Welcome Break, and adjusted to reflect the rest of their estate.

The site officially became part of Welcome Break in summer 2020. A Greggs store was then added in December 2020.