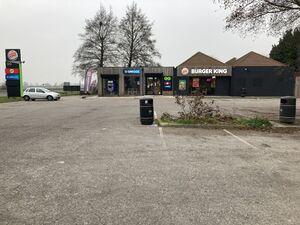 A1 southbound between Newark and Doncaster

One of the recent Applegreen acquisitions is this forecourt next to a former Little Chef. 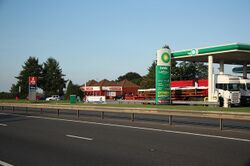 A Little ChefHistory opened here in the 1960s, next to the existing forecourt. It operated in tandem with Cromwell and in the 1980s it was thoroughly refurbished and gained a Little Chef Lodge. It later gained a Burger King, with the main Little Chef eventually closing in April 2015 and continuing as just a Little Chef-operated Burger King.

Euro Garages acquired the Burger King in January 2017 when they brought the rights to Little Chef and during late 2018 it closed for refurbishment, reopening in February 2019 in an extended building alongside a new Greggs store. The original plans also included space for a coffee shop however this space is now hidden behind a fake wall.

The filling station was originally branded Shell. It was later operated by The Carsley Group, who provided BP and a Londis store. It was taken over by Applegreen in May 2018. Applegreen later transferred their larger UK petrol stations - including former Carsley Group ones - to Welcome Break, but North Muskham was excluded because only minimal catering facilities are provided here, especially when compared to the larger Euro Garages facility attached.

Following the second coronavirus lockdown in December 2020, Travelodge permanently closed the hotel here in favour of their new hotel in Newark-on-Trent town centre.