Welcome Break is the oldest surviving motorway name, but it has gone through a lot of changes, as this page explains.

Welcome Break was originally the brand name used by a chain of restaurants owned by Mr Chef Ltd. "Mr Chef" was actually former Little Chef managing director Allen Jones, who had left that company after its owner, Trust Houses, merged with Forte. It was agreed that Mr Chef was too similar to Little Chef, so staff helped him choose the trading name 'Welcome Break' instead.

The earliest known activity from Welcome Break was in February 1972, when they purchased a building near Shepton Mallet, and soon announced that they were looking for more buildings to take over. By 1974 the business had been renamed Welcome Break Ltd and there were several Welcome Break Cafes, generally using existing cafés or tea bars that they had taken over.

Welcome Break followed a similar format to Little Chef, being small, waitress service restaurants, generally in converted houses. They were usually positioned next to petrol stations on major A-roads in southern England.

After only a few years, Welcome Break joined forces with the former Trust Houses managing director, who had recently started up Happy Eater. The two wanted to work together to more effectively target Little Chef. The initial publicity said that Happy Eater would target the south east while Welcome Break remained in the south west, and branches such as Lamberhurst were converted.

This arrangement must have been very short-lived, because by 1979 all 10 of the Welcome Breaks had either closed or become Happy Eaters. The Welcome Break name was redundant but retained by the company. The Imperial Group had come to own both Happy Eater and its assets, and four Motoross motorway services. In late 1983 they applied the redundant Welcome Break name to the Motoross service areas, leaving open the possibility of using the brand elsewhere too.

The service areas used discreet colours and subdued lighting. The main restaurant was named Welcome Break or Welcome Cafeteria, with a takeaway unit called Burger Break and, in some service areas, an ice cream kiosk. Electronic games were provided for children, and a number of themed events were held to attract customers.

Welcome Break were beginning to stand out, and Imperial were expanding them too. In this short period, they took on Ross Spur and won the contract to run South Mimms.

The Imperial Group were subjected to a hostile takeover from Hanson Trust, who moved all the hospitality names including Happy Eater and Anchor Hotels into one package ready to sell on. It was quickly purchased by Trusthouse Forte in August 1986, who were again pleased with the Welcome Break brand. Forte merged Welcome Break's management with their own, but said they wanted to keep Welcome Break distinctive from their existing motorway service areas.

Two years later, Forte decided the Welcome Break name was so strong, they would use it to replace their own. It was almost a totally new brand, with the yellow logo replaced by a new swan. For the first few years the THF crest remained in the corner of the swan logo, to help THF establish their presence.

Like the other operators at the time, Forte began to kit out Welcome Break with a number of new facilities. Three Happy Eaters opened, as well as several hotels branded either Forte Travelodge or Welcome Lodge. The restaurant would be The Granary, with a Julie's Pantry or La Baguette takeaway, and a sandwich shop named Piknics (shortly removed), and a shop called The Shop (with a large font and bright colours).

Each service area was also given a speciality shop, with examples being Book Stop, Music Stop, Flower Shop, Toy Store, Shirt Factor, Thorntons and Halfords. They registered the names 21st Street Audio and Visual and Fruit Tree, but these appear to have been used within the shop (branded 'The Shop').

A Little Chef was then introduced to most Welcome Breaks, as was KFC, a Coffee Shop and Sweet Delights. The service was well received: by 1989, all 13 of the top-reviewed motorway service areas were either Welcome Breaks or their sister companies.

Forte opened more small Welcome Break service areas, including Dover Port and Copdock Mill. At this time Welcome Break gained a French sister company, named Côté France. This was Forte's newest acquisition and although it was operationally separate to Welcome Break, Côté France was designed to be familiar to British road users, and used much of Welcome Break's styling as a starting point.

They moved Welcome Break's head office out of their roadside catering office in Epsom to a dedicated building in Newport Pagnell village in the late 1980s. 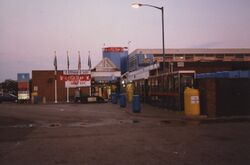 Little Chef branding at Keele, shortly before it was removed.

In 1995 Forte announced that they were going to add a McDonald's to every one of their service areas, but the process was stopped after just two because Forte were acquired by Granada, a deal which included Welcome Break.

Granada described Welcome Break's original concept as "still looking good", but that they "have not been kept up to date", adding that Forte had "starved them of cash". They said that they wanted to add Burger King and Little Chef to all the service areas and make use of the Travelodge chain which they had also acquired as part of the deal, and that in doing this they wanted to make a much-doubted £500m from it.

Just months after buying them, Granada raised the prices at all of their service areas given that they now owned over 75% of the motorway market: for example the M4 is 189 miles long and yet the only service areas which weren't owned by Granada were at the very end. It's not surprising that they did make their £500m.

Under leaders including Rod McKie and Pavilion's Michael Guthrie, the new Welcome Break wanted to place an emphasis on quality and employee satisfaction.

The new Welcome Break wanted to introduce new "food halls", which had facilities including a news stand, sweet shop and galleria, as well as La Brioche Doree and Cafe Primo. They were also trialling a shop called The Junction. For a while former Red Hen units were left unused, before becoming Primo Lounges and now Starbucks. Welcome Break went on to change their shops to WHSmith, game arcades from Game Zone to Welcome Break Gaming, and restaurants from Food Connection to Eat In. After an unsuccessful trial with Sainsbury's, Waitrose was introduced.

A major rebrand was carried out in 2006. Welcome Break said this was all about "stopping MSA bashing".

Welcome Break created Radiant pre-pay order terminals to manage the queues outside KFC. These inspired the fast food brands to create their own order points.

After making a profit for the first time in a while, Investcorp put Welcome Break up for sale in 2008 with a price of around £500million. They were bought by Appia Investments, although the exact price is not known.

The Times listed Welcome Break as being the 81st biggest private company in 2008 (dropping 22 places since the year before), with annual sales of £631m and profits of £37m. A new Starbucks drive thru.

Welcome Break have talked about branching into another sector all together, with the opening of service areas at Cardiff Gate and after that Peartree, both of which aim for local traffic as much as long-distance traffic. This turned out to be followed by the introduction of more take-away units, shops and drive thrus aimed at commuter traffic.

They took over the catering at the Eurotunnel UK Terminal, and later agreed to take on the freight terminal as well, but this agreement later ended, despite rumours it could be the start of more non-motorway units. They also considered working in France and Holland, and they made a bid to run motorway service areas in Ireland.

Welcome Break also operate hotels outside of motorway service areas. For a while their only such site was at M1 J40, but another has opened near Glasgow.

In August 2018 Applegreen made a move to purchase 55% of Welcome Break. Applegreen explained that they would be responsible for the brand's overall "strategy and operations", while Welcome Break's management would take responsibility for Applegreen's existing UK locations - though this may just mean the larger ones. Since then, Welcome Break's forecourt strategy has changed to closely follow Applegreen's, while the Welcome Break brand is expected to be applied to several Applegreen service areas in Northern Ireland.