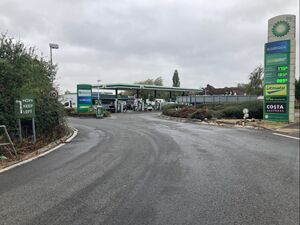 A1 northbound at Peterborough

An old truckstop on the northbound A1 has been overshadowed by it's larger competitor less than a mile to the south.

A truckstop and café opened here in the 1930s. Known as Kate's Cabin, it became a well-known landmark and has now leant its name to the whole service area. The truckstop is remembered by lorry drivers mainly for its potholed car park.

The facilities gained a BP petrol station, which became self-service in 1978. The petrol station was rebuilt in 1987, and again in the late 2000s. In late 2015, was sold by BP to an independent dealer, who introduced a SPAR store and Subway to the site.

The site was later acquired by Applegreen in late 2017 who rebranded the SPAR store to their Applegreen branding and kept the Subway concession.

Applegreen purchased a significant stake of Welcome Break in November 2018. One of the trade-offs of the purchase was that this site would eventually be re-branded Welcome Break, and adjusted to reflect the rest of their estate. Welcome Break took operational control in summer 2021, keeping its unusual name of "Kate's Cabin". Applegreen and BP branding is still used around the forecourt.

A Greggs store was added to the forecourt, opening on 4 December 2020. Kate's Cabin café closed at the end of March 2022 as the landlord has plans to use the land for other means. The HGV parking continued for a short while after before being removed in summer 2022.

The Subway store permanently closed on 17 August 2022 and is set to be replaced by an extended Greggs store as well as an additional food to go area. 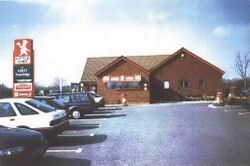 The Little Chef, pictured in 1995, before the building was extended.

On the opposite side of the road was the Alwalton Little ChefHistory and a Travelodge.

Although these weren't signed as services, it's worth noting that it was one of the oldest Little Chefs in the country, even if it was rebuilt in 1986 in its more familiar brick styling. At the same time a new Little Chef Lodge opened, which is now the Travelodge. The old restaurant was in the middle of today's car park, and there was a small, abandoned petrol station there too.

The building gained a Burger King in an extension in 1998. The restaurant lasted until the very end of Little Chef, January 2018, when the rights for EG Group to use the brand expired. Keeping it this long was unlikely to be a deliberate decision, but the result of the new owners having problems converting it to a Starbucks. Time had ran out and the restaurant transferred to the temporary brand EG Diner.

Both EG Diner and the Burger King closed on 23 May 2018. For a long time it was not known what EG Group intended to do with the building, as it lay empty. The old building was demolished in June 2019 and a new Starbucks opened on 10 January 2020.