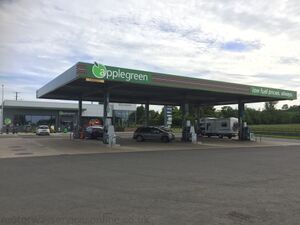 A26 between Ballymena and Coleraine

A new-build Applegreen service station on the newly-upgraded road to Coleraine. Although it isn't signposted from the road, it is possible to access it in both directions using the old-style gap in the dual carriageway.

Free parking is provided for customers only. A large, muddy, lorry park is available but may close soon.

The mud that passes as the lorry park.

The history of this address started with The Fort Royal Inn, an art-deco, flat-roofed pub with bungalow next door. It suffered from a fire in 1991, and later became Fort Royal Tavern.

The building became The Big House in 2011. It was demolished in 2015. The new petrol station was then built in its place, and the road junction was upgraded.

Applegreen purchased Welcome Break in 2018, and they announced that this new site would be a good candidate to transfer to the new branding. As of 2020, no rebranding has happened, but minor internal changes have been noticed.

Chic Limited proposed building a new hotel and restaurant on the land currently being used as lorry parking in 2019. Permission was secured in May 2022. Access would be provided through the forecourt.