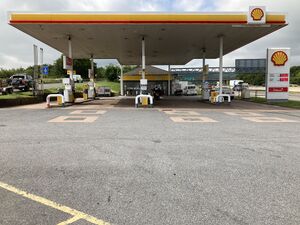 A38 southbound between Exeter and Plymouth

Signposted from the road? From A380 only

This is the petrol station by Splatford Split. For Haldon Hill, see Winning Post.

Kennford is a small petrol station beside the A38 southbound, easily missed among the weaving as traffic prepares for Splatford Split.

It wouldn't normally qualify for this database, but there is a sign on the A380 northbound giving directions to "Kennford services", so it earns its place here. The flyover provides access to the petrol station from both the A380 and the A38 northbound. 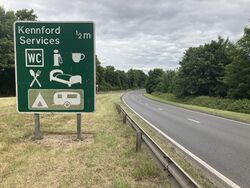 The only signage that this service area receives.

The A38 through Kennford had a garage on the main road. When the road was upgraded in the early 1970s, the old garage became the Gissons Hotel, and a new forecourt was built on the new dual carriageway. It was also accessible from the old road. In the late 1970s it was rebuilt, with a new sales shop and two-way access onto the old road. The site has been branded Shell since opening, and continues to be to this day.

The A38 here has a number of exits in quick succession, and the petrol station is not acknowledged by the national highway authority. This is not unusual for such a small site, especially when there are already so many road signs in the area. The entry road is also very short: in 2011 the Highways Agency reported two incidents of vehicles speeding into the site and colliding with the shop.

What is unusual is that the A380 northbound (maintained by Devon County Council) does have some standard road signs promoting "Kennford services", albeit in a poor state of repair and probably forgotten about. These signs direct traffic over the bridge and round to the southbound side. The route is somewhat convoluted, especially considering that fuel is already available on the A380 at Telegraph Hill.

Officially, the correct procedure to rejoin the northbound side was to head south and turn around at Old Haldon Hill. This turning was closed in 2015 and you would now need to continue up the hill. Realistically, most people will turn around in the petrol station and head back the way they came.