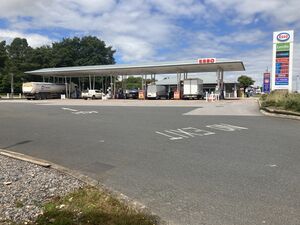 A38 northbound between Exeter and Plymouth

A pair of restaurants at the Exeter Racecourse exit, although only the northbound side is signed as a service area.

A dedicated large vehicle parking area is also available at the centre of the site and is free for the first hour. After this, all vehicles must pay £1 per hour and £13 for up to 24 hours.

Prices are paid using PayByPhone or by using the pay machines in each car park. The location code is 805109. 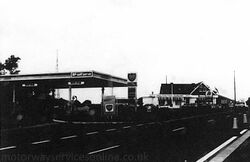 The Happy Eater and BP forecourt in 1986.

Historically this site was known as Haldon Hill services, but the current owners tend to call it Winning Post - a reference to the adjacent racecourse. It has also been known as Kennford, not to be confused with the previous service area.

Although there is a direct access and exit from the A38, there is also an entry and exit to the local road network meaning light vehicles heading southbound can access the site by using the underpass at the Dunchideock exit. 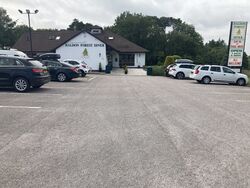 The former southbound Happy Eater is still trading as a Diner.

The northbound side started as the Haldon Road House, positioned next to the Harker Lane turn. By 1975, the road house had been rebuilt and had become one of the original Welcome Break restaurants. It had a tall, pointed roof, and was positioned alongside a BP petrol station. The rebuilding may have been connected to the A38 becoming a dual carriageway, which came very close to the old building.

The southbound restaurant was built next to a track leading to the restaurant in 1978 - this may have been planned as a Welcome Break, but around the same time all of the Welcome Breaks (including the northbound one) became Happy Eaters.

The northbound restaurant was rebuilt in 1986 to look similar to the southbound; it was painted white with a low roof. In 1995 both restaurants became Little Chefs. The northbound Little ChefHistory had a conference room, and there were plans to build a Travelodge at the back of the car park.

The southbound Little ChefHistory closed in 2007, becoming Haldon Forest Diner. The signs calling it a service station were removed, in fact a sign immediately before the exit tells traffic there is a lay-by to use further ahead. The restaurant shares its exit with a small lane and an emergency access to the racecourse.

The northbound Little Chef closed in 2012 and two years later became the Route 5 diner. This is the only one in the chain not numbered after the road which serves it, as they already have a Route 38.

The petrol station was formerly operated by Chartman Retail then MRH and included a SPAR store. MFG had proposed to change this to a Budgens but instead decided on Londis. This refurbishment was completed in winter 2019, where a Greggs store was also opened.

A large expansion to the service area was proposed in 2017 by TRM Land Promotions. The land behind Route 5 began to be developed in 2019, with parking for cars and HGVs, a large McDonald's Drive Thru and a Costa Drive Thru being built. Both units are expected to eventually be open 24 hours, and will be accessed from the lane leading to the Dunchideock turn. The McDonald's Drive Thru opened on 26 August 2020 and is operated by owners of the MFG forecourt, whilst the Costa followed in September and is directly operated by Costa.

The Route 5 restaurant was acquired by Loungers in November 2022, who intend to rebrand it as Brightside in 2023. This will be the first of a new chain which claims it will operate on a similar business model to the early days of Little Chef and Happy Eater, which were both big inspirations for its chairman, Alex Reilley. Haldon was chosen because of its heritage as a roadside dining location, with plans for many more sites, all of which will have a very similar style and an '80s vibe.

The chairman called the focus on long-form dining "a risk", but hopes families and holidaymakers will appreciate the "genuine hospitality", with a menu of brunch, burgers, pizza and kids' food, against a backdrop of "tired and uninspiring" competition from most other roadside food offers.

Route 5 closed on Monday 21 November ahead of the refurbishment. The restaurant in expected to reopen in February 2023.