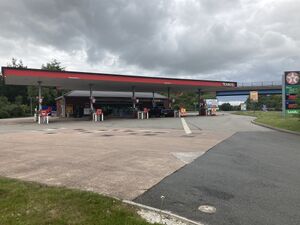 One of several facilities available to traffic in the Haldon area of Devon, Telegraph Hill features a petrol station and diner arranged around a flyover on the A380.

The Haldon Chalet and garage were built at the crossroads at the top of Telegraph Hill. These two buildings still exist, but are no longer visible from the A380 and are part of the larger Haldon Chalets site.

Both restaurants closed in the 1980s, as did the southbound petrol station. It became the Smuggler's Rest Cafe, which was part of the Four Seasons Estate caravan park. There were several plans to develop this into a comprehensive service area, as well as a proposal in 1999 to build a new Little Chef on the site of the old northbound one.

The Smuggler's Rest Cafe was closed in the 1990s, and the site was demolished. There were still several plans to build a new service area here, with some providing access onto the A380 and others onto the side road. The most recent plans are for a drive thru unit as well as two warehouses.

The Haldon Chalet Junction was a notorious accident blackspot, but this was resolved with the construction of a new flyover in 2005. The northbound petrol station was unchanged by the work, but the new road layout caused its entrance to move from the A380 to a slip road from the new junction. The old exit onto the A380 still exists, as well as the option of a new exit back to the junction.

As a result of the new road layout, signs were erected to advise northbound traffic that the entrance to the petrol station is now down the new slip road, and to advise traffic on both sides that all facilities are now fully accessible via the new flyover. For reasons that are unclear, these road signs are non-standard and refuse to call the facilities "services". 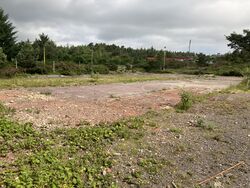 The northbound petrol station changed to Jet, but returned to Texaco in around 2008. In 2020, current owners MFG rebranded the forecourt shop from Hursts to Londis and added a jet wash.

A Starbucks Drive Thru is also being proposed to be built on the remains of the restaurant land.