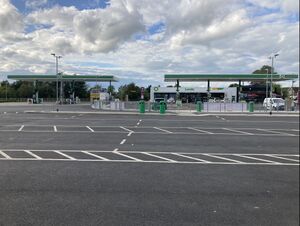 A1 northbound between Stevenage and Biggleswade

This is the current A1 forecourt in Bedfordshire. For the former service area in Yorkshire, see Aberford.

Another site which had become a shadow of its former self: the site has recently been given a new lease of life.

Parking within the dedicated Costa car park is limited to 3 hours maximum stay and is strictly enforced.

For many years Astwick looked like a typical pair of Little Chefs and petrol stations, but the history is a lot more colourful. 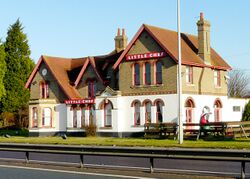 The southbound Little Chef before it closed.

Astwick's history starts with a large house called 'Roseland' (later 'Chilcotes'), which was built in the 1910s next to the Great North Road, opposite the Greyhound pub. The Northway Garage (and a house behind it) were built in the 1930s, slightly south of here.

In the 1960s the A1 was upgraded to a dual carriageway, with frequent gaps for turning traffic. The garage became the southbound BP petrol station, while 'Roseland' was taken over by Happy Eater in the 1980s to become their Baldock branch. In 1989 the Hinxworth Travelodge was built next to it.

That Happy Eater became the Baldock branch of Little ChefHistory in 1996, following the merger of the two. It operated until 2010, when it was closed and left derelict. The Travelodge closed in 2013, but the following year that was taken over and refurbished by Redwings Lodge.

The forecourt gained a Wild Bean Café in 2009, but the whole place closed in 2018 leaving only a hotel on the southbound side. Both the restaurant and forecourt reopened in summer 2019 under the name Cotey's and Applegreen respectively.

The northbound service area was built in 1980 on the site of New Inn Farm, in between the southbound facilities. Building here meant that northbound customers no longer had to turn across the A1 dual carriageway, which was both off-putting and likely to be closed at some point.

This purpose-built development consisted of a petrol station (branded 'BP self serve') and the Astwick branch of Little ChefHistory. This was a flat-roofed diner which looked considerably less grand than its southbound counterpart.

Permira selected this branch for closure in 2004, probably selecting it because it didn't have a hotel, and because since 2001 Baldock services has been positioned immediately to the south. Nobody could be found to purchase it so the building was permanently locked, with its furniture still inside.

The building stood like this until summer 2009, when the former restaurant building was demolished to make way for BP to re-build their petrol station and replaced it with a much larger site. The forecourt was sold in 2014 with the shop being re-fitted under Nisa Local brand, and it gained a Subway outlet in 2017.

Highway Stops Retail redeveloped the forecourt in late 2020, adding new HGV pumps, 4 bp pulse electric vehicle charging bays being installed and new parking areas for all vehicles including caravans and HGVs. The work also saw an extension to the sales building which added a Costa Drive Thru store to the site, with the drive-thru lane looping around it. The refurbished forecourt opened in early 2021 with the Costa Drive Thru following in March 2021. The forecourt shop later rebranded to Londis during summer 2021.