No photos tagged with Selby Fork. If you have one, why not upload it?

Selby Fork was the name of a Happy Eater and a motel positioned on the old A1 southbound at Ledsham, close to J42 of the new A1(M).

In 1996 the Happy Eater at Selby Fork was converted to its sister brand, Little Chef. The site had an entrance from the A1 southbound and a two-way exit leading to Holy Rood Lane and the Selby Fork Roundabout.

Aware that there were plans to replace this section of the A1 with a motorway, in March 1996 Forte/Welcome Break applied to replace the existing facilities with a new motorway service area, which would have been ready to serve the new A1(M). The proposal was dragged out and eventually withdrawn.

The motorway opened in 2006 and the Little Chef was closed around this time. It is now used by Atkinsons Fencing and Outdoor Living. The Selby Fork Motel became Quality Hotels, and now South Milford Hotel. 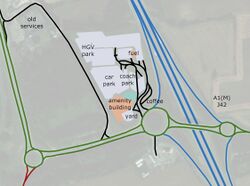 In April 2019, Roadchef proposed two new services for the A1(M), here at Selby and at Catterick.

The new service area would be built in the field east of the old services, joining the roundabout at A1(M) J42. When arguing for the services, Roadchef suggest that there is a shortage of services in the region, especially when considering the low quality of the facilities available.

The proposal gives us some indication of what it looks like when a motorway service area is designed under the current regulations (which were updated in 2013). It is understood that Roadchef will be obliged to charge staff to park at the site, to satisfy a planning concern about traffic being generated.

The proposal is currently being considered by Selby District Council.