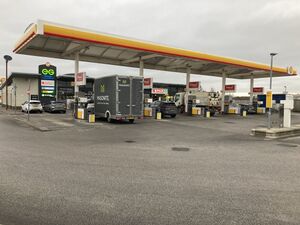 18 more photos in the gallery
Location:

The designated Markham Employment Growth Zone saw a new motorway junction constructed, and it gave rise to an example of a new style of unofficial service area which puts brand names first.

All facilities are subject to their own parking restrictions so please ensure you check the signs before parking. These are the restrictions we know about:

Parking and use of the Shell forecourt and Starbucks Drive Thru is free for the first 2 hours for all vehicles, after which cars must pay £8 for up to 24 hours and HGVs, coaches and commercial vehicles must pay £14.99, or £19.99 to include a meal voucher. Prices can be paid in the shop and these restrictions are strictly enforced by ParkingEye.

Parking and use of The Little Castle pub is limited to 3 hours maximum stay and is also strictly enforced by ParkingEye.

Parking and use of the KFC restaurant is limited to 75 minutes maximum stay and is strictly enforced by UK Car Parking Solutions.

Parking and use of the McDonald's restaurant is limited to 90 minutes maximum stay and is strictly enforced by UK Parking Control. 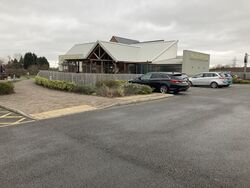 Work on the Markham Vale Employment Growth Zone first started in 2006 with 85 hectares of land spread across 3 districts on the site of the former Markham Colliery allocated for regeneration by Derbyshire County Council.

As part of the redevelopment of the area, a new junction on the M1 (junction 29A) was created specifically to access the new Markham Vale area. The land to the west of the new junction, blandly named Enterprise Way, was set aside for a retail and leisure development in an area which was broken up into plots and became known as Aaron Street. This is th facilities we see here today.

Although the service area is not signed from the motorway, it is visible and advertised as a motorway facility by filling station owners Euro Garages. The trend of offering fuel and a restaurant next to a motorway junction is very American in nature, and becoming increasingly common in the UK as brands such as McDonald's become more popular and planning laws are relaxed. The Ordnance Survey now shows Markham Vale as a full motorway service station.

The site is also known as 'M1 Commerce Park', but EG Group use the more conventional name 'Markham Vale services'. They have also been known to call it 'Duckmanton services'.

Despite it not being an M1 motorway service area, the M1's variable message signs were used to warn of disruption at its forecourt during the 2021 fuel crisis, where even the National Highway authority were calling it "Markham Vale services".

McDonald's was the first brand to open at the Henry Boot site, opening in late 2012.

The next development came in April 2014, when Euro Garages opened their Starbucks Drive Thru and Shell forecourt, with a SPAR store and Greggs and Subway franchises included. Marston's Pubs opened The Little Castle that December, with an opening ceremony attended by the chair of Derbyshire County Council.

Euro Garages expanded their facilities to include a KFC Drive Thru in 2016, built between The Little Castle pub and McDonald's restaurant.

Chesterfield fish and chip restaurant owners Chesters are currently constructing a drive-thru restaurant here, in what is a £1 million development for the firm. Their plans also include 2 electric vehicle charging bays and the restaurant is expected to open in late 2022.

The forecourt shop rebranded to Sainsbury's On the Go in late 2019, but reverted back to SPAR in late 2021. The store then rebranded again to ASDA On the Move in January 2023.

EG Group are also looking at adding four electric vehicle charging bays to their Starbucks car park. Meanwhile, Dunkin' Donuts are seeking to add to the collection of generic drive thrus with their own drive thru coffee shop at the site entrance. This is the last plot of land available at this complex.

It became clear in December 2020 that electric forecourt developer GRIDSERVE were seeking to build a copy of their Braintree charging site opposite the existing service area at Markham Vale.

This became official in April 2022, when a planning application was registered with the local authority. GRIDSERVE are seeking to provide 22 high-powered car chargers, five low-powered car chargers and three HGV chargers, arranged around an island. Documents show that this island would have toilets on the ground floor, and two retail units upstairs on the first floor. There would be 14 more car parking spaces, air and water points, a cycle shelter and a vehicle lift, to allow events to be held upstairs.