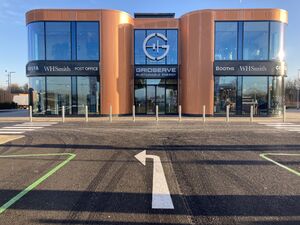 A131 at Great Notley

A glimpse into the future of the service station: GRIDSERVE at Braintree opened on 7 December 2020, and features more electric vehicle charging spots than it does traditional parking spaces.

The Hitachi-backed company claims to have built the world's first electric forecourt, with a variety of chargers including some for vehicles that haven't been made yet, as well as provision for electric motorbikes, buses and HGVs. While the site was in development for many years, it is hoping to be ready for a strong uptake in electric vehicle ownership, with the UK government having recently banned the sale of petrol and diesel vehicles from 2030.

Inside, a small range of traditional service area facilities are available during the daytime, while upstairs is the facility to lease an electric vehicle, which the owners believe will encourage future customers. It also aims to use its size and capacity to be able to charge lower prices than the single vehicle chargers usually found in supermarket car parks.

The power for the chargers comes from renewable energy, much which is generated on-site. There are overhead solar panels which make the parking area look somewhat Mediterranean.

Under current English legislation, anywhere which doesn't sell fuel cannot be officially advertised as a service station by the highway authority. That rule will eventually change if more places like this open. GRIDSERVE Braintree may not live long enough to see this, as it currently only has permission to operate for 30 years and would need to be returned to agriculture after that. 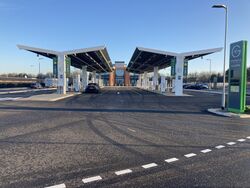 GRIDSERVE's replacement for the petrol station.

GRIDSERVE's founder and chief executive Toddington Harper really is named after the motorway service area. And his brother is called Heston, too. Their parents ran a solar panel business and got them interested in renewable energy.

Braintree is the first of a number of projects already being planned by GRIDSERVE; they have pledged to deliver "over 100" overall. Naturally not all of their developments will be on major roads so they won't all fall under our remit. But the ones we are aware of are:

Here at Braintree, the forecourt opened with a Booths which was operated by WHSmith. Booths was replaced by M&S Food, a previously established partner of WHSmith, on 20 January 2022.