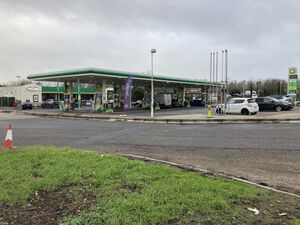 The Boreham Interchange is a complicated mess surrounded by retail parks, supermarkets and new pubs, and somewhere within them is a large service area.

Prices can be paid in the forecourt. The fees are strictly enforced by CP Plus.

The McDonald's car park is limited to 90 minutes maximum stay and these restrictions are strictly enforced by MET Parking. 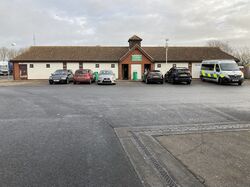 The separate toilet block between the two parking areas.

BP, who provide the main facility, and Chelmsford City Council, both say that this place's name has been changed to Boreham services. The Boreham Interchange is certainly a well-known reference point for locals. However, a large sign by the entrance, which was recently replaced, continues to welcome motorists to "Chelmsford service area" - so that's what visitors know it as.

Note that there is a second Premier Inn positioned on the opposite side of this junction. Confusingly, that one takes the Boreham name, while this one is demoted to Springfield.

Unusually, this place still has a separate toilet block. These used to be common at A-road service areas, but most have since been moved into the main building to encourage custom and make cleaning easier. This particular one is an especially large building that looks a little more grand than somebody might expect from something so functional.

The Chelmsford Bypass (including this notorious junction) was built on the cheap in 1986. Space was left in the middle of the complex for a service area, which came a few years later. It was called 'Chelmsford services'.

As early as 1986, Hambros Bank made a planning application to develop this land and the cattle market next door. Their project included a hotel, petrol station, restaurant and fast food outlet. Permission was granted but not taken forward.

The main planning application was put forward by Mobil in 1989, and used broadly the same layout as what is there today, with land allocated to a fast food restaurant, motel, Mobil's petrol station and 40 HGV parking spaces. The petrol station had a small block at the back with toilets and payphones, while the HGV parking area had a building allocated to the RAC. These were both moved to their current positions before being built.

Mobil described it as an "experiment", as this site was designed to be able to easily handle HGVs, whereas most other A-road services were too small and tight. The concept included a hut which could be leased to an independent caterer, with the vision being that drivers would pay the caterer a fee to use the showers.

In late 1989 Esso also made a plan to build here. Their layout was very similar, but they had a hotel, restaurant, shop and toilets all combined into one single-storey building. Esso soon withdrew their plan. They did not mention who would have run their restaurant: Esso had been known to work with Granada, but this particular proposal probably wasn't far enough advanced to consider such detail.

The petrol station changed to BP in 1997 following their takeover of Mobil's UK network, at which point the site became known as Boreham. The site gained an enlarged BP Connect store and Wild Bean Café in 2003, with M&S Simply Food opening up in there in 2007. The car wash building with its tiled roof dates from the Mobil era.