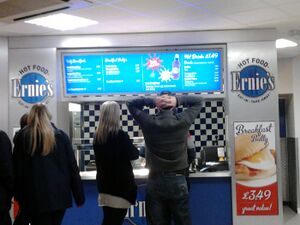 Ernie's Fish & Chips was a brand of fish and chips created by Moto, and trialled at two services in Northern England.

It was first introduced at Ferrybridge on 11 February 2013, with a further branch opening at Birch eastbound. The Birch outlet was removed while the Ferrybridge branch returned to selling a standard EDC menu. The Ernie's branding was removed in late 2015.

Ernie's Fish & Chips used to be found at the following service areas: