No photos tagged with Rock Island Diner at services. If you have one, why not upload it? 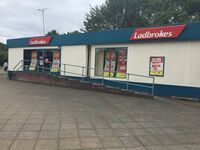 The Tamworth branch became a Ladbrokes.

There used to be a network of 1950s, rock-and-roll-themed Rock Island Diners across the country, although there are none left now. There were only ever two at motorway services.

At a time when Granada were rapidly expanding Little Chef, at two of their services they decided to trial a different restaurant option. Rock Island Diner had a similar appeal, but was a little more edgy. It had glossy chrome and red plastic fittings, 1950s-style posters, and played rock and Beatles music. The main burger cost £4.60.

Granada's trial of Pelican Group's franchise began in summer 1994. One review called it "genuinely fun to eat in", even though it wasn't very busy.

At Tamworth, Rock Island Diner was initially provided in a separate building. In 1997 it was moved inside the building, where its seating capacity was doubled. Insiders claimed it needed the exposure because it was failing, but Granada insisted it was a promotion. Both branches were soon replaced by Granada's favourite brand, Little Chef.

When Granada was redesigned in 1997, Rock Island was treated as a core part of their offer. Those who did the design work seemed to believe many more would be opening.

The diner format was used again by Welcome Break in 2016 with their tie-in with Ed's Easy Diner, which also used a purpose-built separate building.

Rock Island Diner used to be found at the following services: