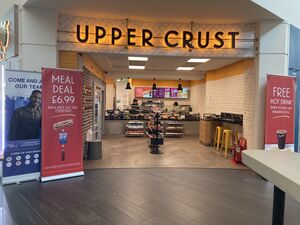 Upper Crust and The Pasty Shop are two bakery and coffee chains, which in Britain are mostly associated with railway stations.

The two entered into a partnership with Welcome Break in 2018, which saw branches open at Oxford, Telford and Warwick.

The relationship with Little Chef was short-lived, but the motorway branches lasted for a few more years, long after Granada had become Moto. Even after Moto were split from SSP in 2006, most of the Upper Crusts continued to operate as franchises, and a new one opened at Cherwell Valley in 2010. This would go on to be their final Moto franchise, until it closed in 2020.

Following losses incurred as a result of the COVID-19 pandemic, SSP Group announced 5,000 potential redundancies in July 2020. It is thought that most of these will impact Upper Crust. The branches operated by Moto and Welcome Break should (in theory) be safe, but other branches may be affected.

The Pasty Shop operate at some services and forecourts. They are:

Upper Crust used to be found at the following service areas: