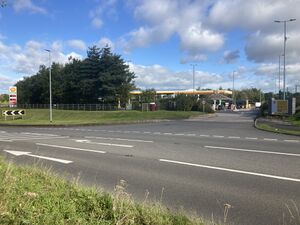 4 more photos in the gallery
Location:

A significant services and truckstop located off the M6 at J42, just south of Carlisle. Official signage is provided from the roundabout only.

First 2 hours free for all vehicles, after which HGVs must pay £21 for 24 hours which includes a £5 shop voucher. Trailer changeovers are charged at £7 per trailer.

Golden Fleece replaces an old (1960s) petrol station, which was positioned at the junction of Steeles Bank and the A6 London Road. The entrance to the service area is roughly the position of the original junction.

Despite not being signed from the M6 and not qualifying to be, the M6's electronic signs are still used to warn of problems at this service area.

The former Thistle Café building was demolished in the first half of 2022 to make way for an extension to the HGV parking area. A new shop extension also commencec construction in early 2022, with the store partially reopening in July 2022 with new toilet facilities as well as a new Stone Willy's Kitchen concession. New showers later followed in August. During the works, a snack bar called 'Fast & Fresh' traded from the HGV parking area to provide catering facilities.

The forecourt was also due to gain four electric vehicle charging points in 2022, but this has been put on hold due to power supply issues. The site will also host one of the world's first HGV hydrogen filling stations, which will be provided by Element 2. Hydrogen-powered HGVs aren't currently used in the UK, but the truckstop is putting the infrastructure in place so that they could be.