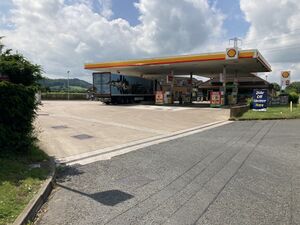 A46 between Tewkesbury and Evesham

A small petrol station by the side of the A46, formerly known as Route 46. 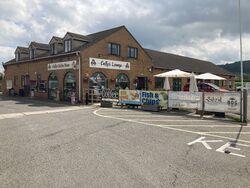 There are references to the Una Manta Transport Cafe on this site, dating back to at least 1974. This had a swimming pool for drivers at the back. In around 1987 this became the Vale Transport Café, which sold petrol, but later closed down.

Power Plant Hire Limited planned to reopen the petrol station here in 1996. The new site sold Gulf fuel. It was later branded BP, with a SPAR store before being acquired by MFG in 2016 who rebranded the site to Shell. MFG later rebranded the shop to Londis in 2018.

The café became Vale Cafeteria in around 1999, operated by Route 46 Truck Stop Ltd. The café and truckstop closed in the mid-2010s and was left vacant until 2018 when it was acquired and split into several retail units, becoming known as Ashton House Business Park. The parking area went onto become a caravan sales centre.

One of the units is rented by Cally's Coffee Lounge, providing the missing café facilities from the site after the truckstop closed. Cally's is named after a young guy called Cally who passed away in 2019 in a road traffic collision close to the services. The café was acquired by new owners in October 2021 with them also operating a tattoo parlour and healing rooms in the neighbouring units. The cafe is now up for sale as the owner wishes to focus on their other businesses in the neighbouring units.