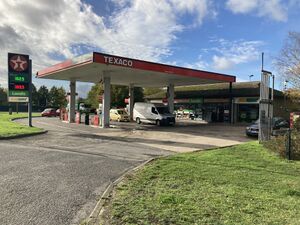 HGVs cannot access the main facilities, only the truckstop.

Short-stay customer car parking is available at all facilities.

HGVs can use The Hut Truckstop, where overnight parking is charged at £22 per night which includes a £5 meal voucher.

Prices are paid in the security hut at the entrance to the site, and can be paid using GBP, Euros, using fuel cards or SNAP. 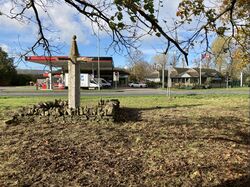 The fingerpost that the service area takes its name from.

The 'hands' at Teddington refers to finger post which is still positioned there today. This was the position of the original crossroads, known as Teddington Cross Hands, where what was the A438 met the A435. There is also the Tibble Stone, which according to folklore the stone was thrown by a giant from nearby Bredon Hill.

The filling station here dates back to at least the 1950s. It was in roughly the same position, but at the time this placed it immediately north of the crossroads. There was a bungalow next door, which is also still there today.

Plans to increase the facilities here came from Warners of Teddington in 1988 who planned to build a new petrol station, hotel and restaurant. Instead, the existing petrol station remained and Roadchef opened a new restaurant next door on 9 March 1989. It would likely have been branded "Hickory's" more prominently than "Roadchef".

The land had that the truckstop is currently sited on was planned to be used for a touring caravan park in the late 2000s. The road through the middle is the original route of the A438, which was abandoned when the new roundabout was built.

Current owners of the site William Gilder had planned to renew the plans for a hotel from a 1988 planning application in 2011 however this was refused. Instead, they opened The Hut truckstop in 2012 with The Hut Café being added in late 2015 situated in a portable building. William Gilder also relocate their business to the site in 2013.

William Gilder currently hold planning permission to erect a new amenity building on the site which will feature a new café, toilets and showers to replace the current facilities.