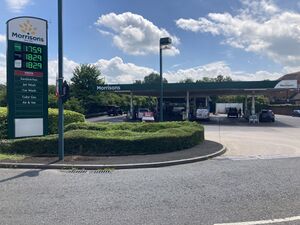 The Four Pools Industrial Estate is sprawling around the bypass area, and includes some facilities which make up a signposted service area.

Parking within the McDonald's car park is limited to 90 minutes maximum stay and is strictly enforced by MET Parking. Short stay customer parking is also available on the forecourt, although no HGV parking is available.

The service area is sometimes known as The Link, after the street address.

The retail park surrounding this roundabout began to be built in 1988. The Evesham branch of Little Chef opened in 1989. Documents suggest it was supposed to have an associated Little Chef Lodge, but it's not clear where that would have been built.

The restaurant was extended in 1999, gaining a Burger King, which was planned to be a drive thru but that didn't happen. The restaurant closed in 2007 and became Frankie and Benny's, which itself closed in 2020 following the impact of the Coronavirus pandemic.

The building was split back into two units in 2022, with Costa Coffee occupying the majority of the building, adding a new drive thru lane around the outside, which opened in June 2022. The other unit will be occupied by Greggs, which is expected to open during the summer.

On the opposite side of the road, Safeway built a petrol station which opened in around 1992. A McDonald's Drive Thru restaurant was developed and opened in 1997. The filling station was rebranded in 2004 following the sale of Safeway to Morrisons. These two facilities are the ones that are referred to by the road signs on approach to the site.