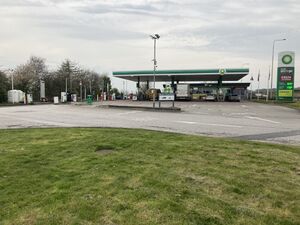 A63 westbound between the M62 and the Humber Bridge

Signposted from the road? westbound only

A pair of petrol stations on the A63 close to Hull, providing the facilities missing from the nearby Humber Bridge picnic area.

Only the westbound side is signposted as a petrol station. In fact, the unsigned eastbound side is very easy to confuse with the Beverley exit, positioned right behind it.

The westbound forecourt was acquired by local forecourt operators Sewell Group in 2008 who in autumn 2012 redeveloped the site introducing a new forecourt and sales building to the site. The new forecourt was rebranded from Total to BP and is one of Sewell's own-branded 'Sewell on the go' stores.

Meanwhile, the eastbound forecourt was acquired by Murco in the early 2010s. Following the acquisition of Murco, MFG took over the site in October 2014 and rebranded the site back to Jet soon after, adding an Ecotricity electric vehicle charging bay to the forecourt in the process. MFG then rebranded the store to Londis in 2017, before rebranding the site to Esso in 2018.

Both forecourts were developed with a large plot of land on either side of them, each being designated for a large lorry park. The eastbound side was closed off in around 1998 whilst the westbound side continues to offer lorry park to this day.

The westbound lorry park was lined up to be turned into a hotel and drive thru diner in 1996, but this wasn't taken forward.

The eastbound lorry park has since received some interest from several businesses including Lexus in 1999 who planned to build a showroom here but planning permission was refused. 23.5 Degrees also applied for planning permission to turn the land into a Starbucks Drive Thru in 2019, which would have been designed to leave space for the rest of the land to be developed however Highways England were concerned with the plans due to the length of the exit slip road and the plans were later withdrawn.