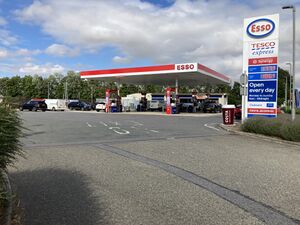 A pair of petrol stations either side of Eynsham Roundabout.

Both petrol stations are accessible in both directions.

The west site is positioned on the eastbound carriageway. No toilet facilities are available, no HGV access is available, and it is not open 24 hours.

The east site is positioned on the westbound carriageway.

Short-stay car parking is provided at both sites.

No HGV parking is available, although Eynsham East (closer to the westbound side) is accessible to HGVs. 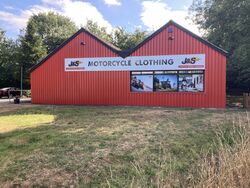 The old westbound Little Chef is now a motorcycle showroom.

The two filling stations were built on small parcels of land left over when the road was built. Both sites opened in around 1984 with the eastbound site branded as Jet.

The original Eynsham branch of Little Chef was positioned a little to the west of both of these. It opened in around 1974 and closed in 1986, when it moved to two new buildings. The old one became a bungalow, but is now a restaurant.

The plan was to build a new Little Chef restaurant and lodge to the east of what's now Tesco/Esso (a site called 'Wasties Garage'), but instead a restaurant was built at the eastbound services, which became known as Acre Hill service station. This Little Chef gained a Burger King, but became a restaurant and is now a car dealership after closing in around 2005.

While that one was being built, another new Little Chef was built at the westbound services, which also closed at the same time. It later became Rumblin' Tums Café before closing in 2010 and becoming the motorcycle accessories shop. A snack bar usually sits in the car park too.

One of the two new Little Chefs was celebrated as being their 250th branch to open.

Meanwhile, in 1990 two different developers also applied to build new services on the A40: one north-west of the Lower Road roundabout and one west of Cuckoo Lane.