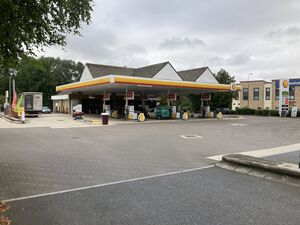 A40 at Ducklington Interchange
(also accessible to traffic on the A415)

A pair of service areas at the main interchange on the Witney Bypass: Ducklington forms the main service area but Witney also gains signage.

The main service area is Ducklington, south of the bypass.

Additional facilities are provided at Witney, north of the bypass.

No HGV parking is available at either service area, although there are is a lay-by on New Close Lane adjacent to the Ducklington site. 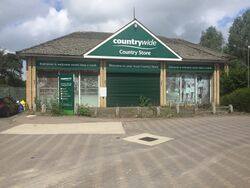 Normally A-roads don't have any planning behind their service areas, as it's up to the free market to provide the appropriate level of facilities.

When the Witney Bypass opened in 1976, Oxfordshire County Council were unusually insistent that a lorry park be provided at Ducklington. The Department of Transport generally took the position that they didn't have the budget to provide A-road services, but at Ducklington they too were keen on the idea of funding a lorry park.

The rest area they had envisaged wasn't built, but two service areas were built instead positioned either side of the new junction - one on the Ducklington side and one on the Witney side.

BP had also proposed building their own service area along the bypass to the west of here at Asthall in 1992, but planning permission was refused.

To the south of the junction, Petrofina built the Regal Garage, which opened in around 1990. This transferred to Elf during the 1990s, and was joined by a car showroom.

The filling station became a Total site in the 2000s and featured a Bonjour-branded sales shop. In 2001, the car showroom was sold to Countrywide who turned the building into one of their country stores. Following Total's nationwide shutdown in 2012, the forecourt was acquired by Shell.

The Countrywide store ceased trading on 10 May 2018, following the collapse of the company. StorageGiant later gained planning permission in 2019 to turn the site into a warehouse. Works commenced in early 2022 with the former Countrywide building being demolished.

The Ducklington Roundabout became the centre of development in 2020. There is now a Costa Drive Thru and Travelodge on the opposite side of the roundabout, as well as Lidl, who built a brand new purpose-built store on the south-western corner after moving from their former store next to the McDonald's at the Witney service area.

The forecourt shop was converted from Budgens to Little Waitrose in November 2020.

At the same time as Ducklington was being built, Shell were planning a site to the north of the junction at the Station Lane junction. This site, Station Lane Garage, eventually opened in 1993 as a Gulf filling station and became more commonly known as Witney services. Upon opening, the site won a West Oxfordshire Design Award for its shop building.

The initial proposals for the Witney site included a hotel and restaurant too, and that restaurant eventually came in the form of a McDonald's Drive Thru which opened in 1997. In the same year, Tesco purchased the forecourt and turned the site into one of their Esso/Tesco Express combination sites. A Premier Inn was also added a little further north of here, but is no longer considered to be part of the service area.